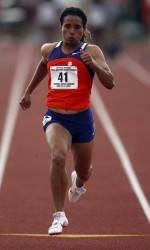 CLEMSON, SC – Three former Clemson track & field standouts and 11 current student-athletes will compete in Des Moines, IA this week at the USA Junior & Senior Outdoor Championships. Eleven of the athletes will compete at the senior championships, while three will compete in the junior event, both of which are held at Drake Stadium. To be eligible for the junior nationals, which begin Tuesday with the multi-events, the participant must not reach the age of 20 during the year 2010.

Former Olympic gold medalist and three-time NCAA Champion Shawn Crawford – Clemson lettermen from 1997-2000 – is entered in the 100m and 200m dash events. He is a former two-time USA Outdoor Champion in the 200. Travis Padgett, who competed with the U.S. 4x100m relay in Beijing at the 2008 Olympics, will compete in the 100m dash. He set the collegiate record after clocking a 9.89 at the Olympic Trials in Eugene, OR in 2008. The 100m dash begins Friday, June 25, while the 200 prelims will be held Saturday, June 26.

Another former Tiger in action this week will be George Kitchens, who was a surprise third-place finisher in the men’s long jump in this very meet a year ago. Kitchens was a four-time All-American in the long jump for the Tigers from 2002-05. He will compete at 12:30 PM local time on Saturday.

April Sinkler leads the way for the current group of student-athletes representing Clemson. She qualified in three jumping events. The triple jump will take place Thursday, June 24 at 6:20 PM. The high jump (12:30 PM) and long jump (2:00) are both scheduled for Saturday.

Freshman sensation Stormy Kendrick is entered in both short sprints for the USA Junior Championships. She should be one of the favorites in both competitions. She will be joined by fellow 4x100m All-American Jasmine Edgerson in the 200m dash. Blake Kennedy also qualified for the junior nationals in the men’s steeplechase.