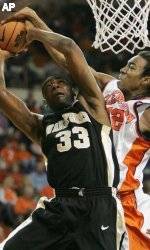 CLEMSON, S.C. (AP) – Vernon Hamilton had a career-high 21 points, including four in overtime, as Clemson snapped a five-game losing streak to Wake Forest with a 74-73 win Wednesday night.

Hamilton hit two foul shots to draw the Tigers (13-3, 2-1 Atlantic Coast Conference) within 71-70. Then after Akin Akingbala’s jam gave Clemson the lead for good, Hamilton drove right of the basket and laid the ball in over Wake defenders Eric Williams and Trent Strickland with 49.9 seconds left.

Williams followed with Wake’s final basket moments later. But the Deacons (11-4) couldn’t not get closer. Coupled with a loss to Duke this past weekend, Wake Forest opened 0-2 in the league for the first time in 13 years.

Justin Gray finished with 27 points. But he made critical mistakes down the stretch. He was twice whistled for five second violations, including one with 1:17 left in OT. Then his pass attempt to Williams was knocked away by Clemson’s Cliff Hammonds to end another possession.

The game finally ended when Gray’s inbounds attempt for Strickland under the basket was knocked away.

The loss also spoiled a career night for Williams, who had 22 points and 20 rebounds.

It was Clemson’s first win over the Demon Deacons since a 118-115 triple overtime victory at Littlejohn in the 2001-02 season.

Wake Forest fought back from 11 points down in the second half and looked like it would keep its Clemson streak going for one more game.

Williams’ jam put Wake Forest up 66-61 with 54.8 seconds to go. But then the problems that have plagued the Demons all season long returned.

Strickland missed the front end of one-and-one foul shots. Gray fumbled away an inbounds pass with 30.7 seconds left. Then Hammonds hit a three from the left corner while drifting out of bounds to tie the game.

On Wake’s final possession, Gray was hit with a five-second call.

Clemson’s K.C. Rivers took a three at the buzzer that bounced away to set up the extra session.

Hammonds added 21 points for the Tigers while Rivers finished with 10 points and nine rebounds.

Hamilton’s point total surpassed his previous best of 19, set against Virginia at the ACC tournament two years ago.

Hamilton had seemingly sealed things for Clemson by banking in a desperation 3-pointer with the shot clock winding down to start a 7-0 run and give the Tigers a 57-45 lead with 9:58 left.

Gray and Williams then scored 19 of Wake’s final 21 points of regulation to keep this game going.

Wake Forest came in near the bottom of the ACC in turnovers and did little to improve that in the opening half.

The Demon Deacons were just 2 of 7 with five turnovers in the first six minutes as Clemson rushed to a 16-6 lead. And the Tigers kept the pressure on Wake Forest throughout the half as the Deacons finished with 12 turnovers.

He and Hammonds had 14 points each for the Tigers in the first half.