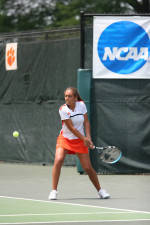 CLEMSON, SC – The Clemson women’s tennis team opened its 2008 season with a 6-1 win over Troy on Saturday at the Clemson Indoor Tennis Center. The Tigers posted victories at the first five singles positions after sweeping the doubles matches.

Salge, a senior from San Roque, Brazil, faced 65th-ranked Bares at the top singles spot on Saturday. With the scored tied at three games apiece in the first set, Salge broke Bares’ serve and won the next two games to claim the set. The 85th-ranked Tiger then won the second set by the same margin.

At flight two, Balda dropped the first set to El Sisi, 6-3, before rebounding in the second (6-2) and third (6-1) to record the victory. An injured Mijacika, the nation’s #4 singles player, played at number three against Troy. She eked out the first set, 7-6(4), against De Bakker and then won 6-4 in the second for her 12th overall win of the year.

Hadziselimovic and Luc were also victorious for Clemson at the flight four and five positions. Hadziselimovic defeated Vieria, 6-2, 7-5, while Luc also posted a straight-set victory over Guijt (7-6(5), 6-3).

The Trojans lone win of the day came at number-six spot as Jounia defeated Kathryn Gerber, 6-2, 6-3.

The Tigers will return to action on Wednesday as they make the short trip to Greenville, SC to take on the Furman Paladins.