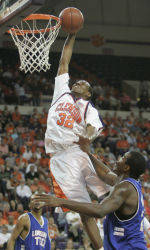 Tigers Move On With NIT Win Over Louisiana Tech

CLEMSON, S.C. (AP) — Akin Akingbala had 16 points and 11 rebounds to lead Clemson past Louisiana Tech 69-53 in the first round of the NIT on Wednesday night.

The Tigers (19-12) won their first postseason game outside the Atlantic Conference tournament since the 1998-99 team lost in the NIT final to California. Clemson will take on the winner of Friday’s first-round game between Louisville and Delaware State.

Louisiana Tech’s slow start in its first NIT game in four years made things much easier for Clemson.

The Bulldogs (20-13) started 1-of-9 from the field and had nine turnovers to fall behind 12-4. They had no answer on the inside for Akingbala, a senior who broke his career high in scoring twice in the previous three games. It was his fourth straight game with double-figure points and rebounds and his seventh double-double in the last 10 games.

Akingbala scored Clemson’s first five points, then had two baskets and a foul shot to push the lead to 26-15. He kept things up after the break, his consecutive baskets putting the Tigers ahead 44-26.

Akingbala was also key in slowing down Tech star Paul Millsap, who led the team coming with 19.7 points and 13.4 rebounds a game.

Like the rest of his team, Millsap struggled. He scored nine of the Bulldogs’ first 10 points, but was called for his third foul with about eight minutes left in the half. Louisiana Tech couldn’t find any offense and was held to one basket the rest of the way and their lowest first-half total this season trailing 30-16.

Things continued Clemson’s way much of the second half, with the lead growing to 18 points.

Then it was the Tigers’ turn to go cold. Louisiana Tech went on an 12-2 run. When Millsap tipped in a miss by Daevon Haskins, Clemson’s lead was down to 51-43.

Vernon Hamilton, however, made four straight free throws to regain control for the Tigers.

Hamilton hit 10 of 12 foul shots, all in the second half, to finish with 14 points. Cliff Hammonds also had 14 points for the Tigers.