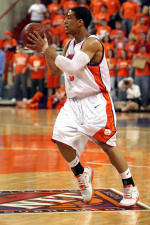 This was Clemson’s first postseason tournament victory sinceMarch 23, 1999 when Clemson defeated Xavier in the semifinals ofthe NIT in Madison Square Garden, 79-76. Clemson needs just onevictory to reach 20 for the season. Only seven teams in Clemsonhistory have won 20 games in a year. The last Tiger team to win 20was the 1998-99 Tiger team that finished with a 20-15 record afterreaching the finals of the NIT. Clemson now has seven more winsthan it has losses and the worst Clemson can do is six more winsthan losses. Clemson has not finished a season with six more winsthan losses since 1996-97 when the Tigers were 23-10 and finishedthe season in the Sweet 16 of the NCAA Tournament. Clemson made itslast 15 free throws of the game over the last 4:39 of the contest.It was the most consecutive made free throws by the Tigers thisyear as a team. The record is 24 in a row by the Tigers vs. Merceron December 30, 1992. Clemson made 20-25 free throws this eveningfor an 80 percent figure. It was just the fifth game since OliverPurnell has been at Clemson that the tigers have shot at least 80percent from the foul line, the third time this year. Ironically,Clemson had lost the two previous games this year in which Clemsonhad shot 80 percent from the line (Virginia Tech at home and atVirginia). Each of Clemson’s last three wins have come againstschools with Tech in their name (Virginia Tech, Georgia Tech andLouisiana Tech). Clemson held Louisiana Tech to 16 points in thefirst half, the fewest points allowed by a Clemson team in a halfsince Northwestern had just 15 in the second half of a 57-44Clemson victory on November 28, 2000. Hamilton’s 10 made freethrows tied his career high. He also made 10 against Florida Stateon Feb. 27, 2005. Hamilton’s 10-12 free throw percentage (.833) wasthe best by a Clemson player in an NIT game since Horace Grant made11-12 against Middle Tennessee in 1986 (min. of 10 attempts).Hamilton had one steal tonight and now has 198 for his career.Cliff Hammonds had 14 points, eight rebounds and six assists thisevening. The rebound total was a career high and it marked thefirst time in his career that he had at least six in each categoryin the same game. He now has a 21/4 assist/turnover ratio over thelast five games. Julius Powell scored 10 points in tonight’s game,just the second double figure scoring game for the freshman overhis last 10 games. He also had 10 in the win over Virginia on Feb.25, 2006. Akin Akingbala had 16 points and 11 rebounds for hisfourth consecutive double-double and his seventh double-double inthe last 10 games. Akingbala had just three double-doubles in thefirst 94 games of his Clemson career and now has seven in his last10. Akingbala out-rebounded the nation’s top rebounder, PaulMillsap of Louisiana Tech 11-9 in tonight’s game. It marked justthe ninth time all year that an opposing player had out-reboundedMillsap in a game all year. Clemson out-rebounded Louisiana Techtonight. The Bulldogs entered the contest 11th in the nation inrebound margin. The 53 points allowed tied for the fewest given upby the Clemson defense in an NIT game. It was the best scoringdefense in a Clemson victory. Clemson lost a 53-49 contest toMississippi in the 1982 NIT at Clemson. Clemson has now won sixconsecutive home NIT games over a span of 20 years.