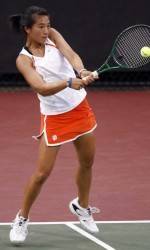 Bek and Wong, ranked fifth nationally, earned a 9-7 win over Zoe DeBruycker and Jennifer Stone of UNC on their home court to advance to the quarterfinals.

In singles, Bek won her match, 6-0, 6-2 over Mihaela Bunea of Coastal Carolina. Bek is the two-time defending champion and the top overall seed in the region. She will play at 9:00 am in the doubles quarterfinals with Wong, and then turn around for a second and possibly third-round singles match later in the day.

Wong is under the same set of circumstances, and she too advanced in the singles portion with a three-set win over Olga Makhova of Charleston Southern. Wong is ranked #39 in the nation and is the #5 seed in the region.

Laurianne Henry, Maria Belaya all posted straight-set victories in their first-round matches as well, dropping a total of 14 games among the four of them.

Caroline Magnusson was the only Tiger to falter, but forced a tough, three-set battle with nationally-ranked Mary Clayton of Duke.

The Tigers return to action Saturday with the doubles quarterfinals and the next two rounds of singles.