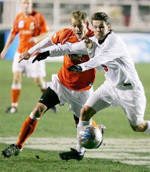 CARY, NC–Andrew Boyens scored the game-winning goal midway in the second half and assisted on the other goal in leading New Mexico to a 2-1 win over Clemson in the semifinals of the NCAA Men’s Soccer Cup at Cary, NC Friday night.

Win the win, New Mexico improves to 18-1-3 overall, while Clemson falls to 15-6-3, this season. New Mexico will play Maryland for the National Championship on Sunday.

New Mexico scored first at the 19:23 mark as Brandon Barklage scored from five yards out. Boyens and Lance Watson were credited with the assists.

Clemson scored at the 39:23 mark. Bradley Gibson served the ball in the box. Charlie Roberts knocked the ball down to Dane Richards who scored from close range for his 12th goal of the season.

Boyens scored the game-winner at the 62:23 mark. David Gualarama sent at pass to Boyens from the right side. He then headed the ball in from eight yards out for his seventh goal of the year.

Clemson had a chance to tie the game with :25 seconds left in regulation. Sturgis sent the ball into the box. Randy Albright headed a ball off the cross bar that deflected down on the line. A defender and the goalkeeper cleared the ball out of danger.

“They did what the had to do to win the game tonight, but I am extremely proud of the way our kids played tonight in terms of the effort that they gave,” said Clemson Head Coach Trevor Adair. ” It is difficult to lose the game because I felt like we dominated a lot of the possession. I’m particularly proud of what we accomplished this year, and I couldn’t be more proud of the kids and the way they turned things around.”