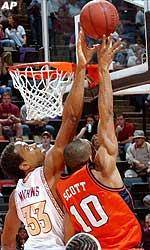 The Seminoles trailed by as many as 10 points in the second half but used a 14-2 run to take the lead.

Cummings hit a baseline jumper with 5:02 remaining to tie the game at 60, and Delvon Arrington followed with a layup to put the Seminoles (10-7, 3-3 Atlantic Coast Conference) ahead for good.

Arrington added 11 points and Michael Joiner scored 10 for Florida State, which won its fifth consecutive home game. The victory also gave the Seminoles more wins that they has last season (9).

Jamar McKnight scored 13 for Clemson, which lost its fourth in a row.

Stockman hit six 3-pointers in the first half, boosting Clemson to a 41-37 halftime lead. The Tigers led by as many as 12 points in the first half before the Seminoles used a late 15-4 run to narrow the margin.