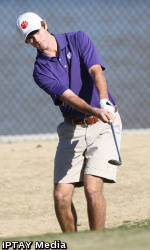 CLEMSON, SC – The Clemson golf team will attempt to do something it has not done in 26 years when the Tigers play in the Insperity Augusta State Invitational this weekend. Larry Penley’s Tigers will attempt to win their third consecutive tournament, something the program has not done since the 1985-86 season.

The Tournament will be held at Forest Hills Golf Club in Augusta, GA and will be held over two days. The 16 teams will play 36 holes on Saturday, then will play 18 on Sunday.

The Tigers have had an outstanding spring, posting a combined 50-1 record against the opposition in the three events. Clemson finished second out of 18 teams at the Westin Rio Mar Classic in Puerto Rico in February, then won the USC-Aiken Cleveland Classic and the Furman Invitational. Clemson last won three straight tournaments in 1985-86 when Larry Penley’s third Clemson team won the South Carolina Intercollegiate, the South Carolina Spring Valley and the Campbell Invitational.

It will be a challenge for Clemson to win the Augusta State Invitational as the field includes number-one ranked Texas and perennial National Champion contender Oklahoma State. The Tigers are ranked 13th in the nation entering the tournament, but will be without highest ranked player Corbin Mills. Mills will be in Augusta, but will be preparing to play in the Masters next week and will not be in the Clemson lineup this weekend.

Clemson has never won the Insperity Augusta State Invitational in nine previous appearances, but has four top three finishes, including last year when the Tigers were third in the 17-team event. Clemson’s best finish was in 2003 when the Tigers finished second behind host school Augusta State. The Tigers went on to win the National Championship that year.

Mills was Clemson’s top performer at the event last year with a 10th place finish off a 215 score. But, three Tigers who played in the tournament last year will be in the lineup this weekend.

Crawford Reeves will be Clemson’s number-one player. The junior from Greenville has had an outstanding spring after missing the fall season with a back injury. Reeves has a 70.56 stroke average in three events and has finished in the top five each of the last two tournaments. He has shot par or better in each of his last six rounds. Last year he finished 12th at Augusta State.

McCuen Elmore is a senior who is third on the Clemson team in stroke average this year at 72.24. Elmore has 11 rounds at par or better this year and has finished in the top 25 in six of his seven tournaments. He fired a 54-hole score of 218 last year at the Augusta State Invitational and his final round even par 72 was a key to Clemson’s strong third place finish.

Two freshmen round out the lineup for the Tigers. Billy Kennerly has been one of the bright spots this year with a 72.62 stroke average, fourth best on the team. He has seven under-par rounds, second best on the team and two top 10 finishes. Kennerly has not finished worse than 11th this spring and has been out of the top 25 just once this entire academic year. He has shot a 72 or better in nine of the last 12 rounds.

Hayden Garrett will be Clemson’s number-five player this weekend. He played in two tournaments in the fall and one so far this spring and has a 74.89 stroke average. His low round of the year is a second round 70 at the Bank of Tennessee.