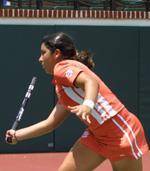 ATHENS, GA – Clemson’s Julie Coin won her second round singles match on Tuesday at the Dan Magill Tennis Complex on the campus of the University of Georgia to advance to the NCAA Final 16. The Tigers’ doubles tandem of Coin and Maria Brito was victorious in their first round doubles match on Tuesday evening. Coin is only the fifth women’s tennis player in Clemson history to reach the NCAA Final 16 in singles, and the first since the 1996 season when Sophie Woorons competed in the Round of 16 for the Tigers.

Coin, currently ranked sixth by the ITA in singles, defeated New Mexico’s 74th-ranked Maja Kovacek by a score of 6-3, 6-0 in the Round of 32 to advance to the tournament’s Sweet 16. The junior from Amiens, France improves to 30-8 overall in singles with the win over Kovacek. In the first round of the tournament on Monday, she posted a 6-4, 6-0 victory over Sarah Foster of Kentucky.

Coin will face the tournament’s second-seeded player, Anda Perianu of Oklahoma in the Round of 16 on Wednesday. Perianu, who is currently ranked fifth by the ITA, defeated UCLA’s Daniela Bercek in the first round and William & Mary’s Megan Muth in the second round to reach the Round of 16.

Coin and Brito, a freshman from Mexico City, Mexico, won a 6-3, 6-3 decision in their first round doubles match over Wisconsin’s Lindsay Martin and Katie McGaffigan on Tuesday. With the win, the pair improves to 25-5 in doubles play on the season. Coin and Brito advance to Wednesday’s Round of 16 to face fifth-seeded Cristelle Grier and Jessica Rush of Northwestern. Grier and Rush defeated Georgia’s Cioroch and Robinson to advance to the Final 16 match.