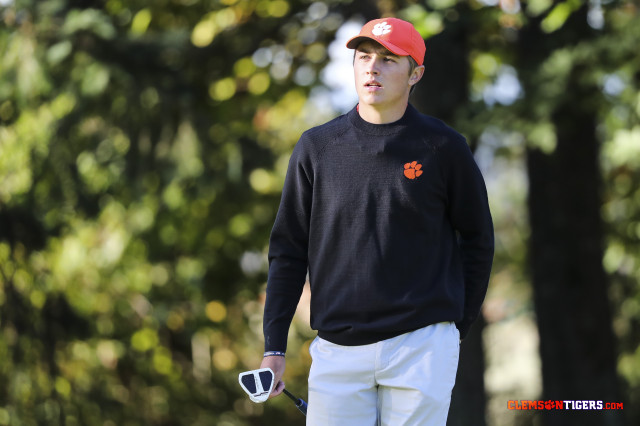 Clemson, S.C.—Freshman Kyle Cottam shot a career best 66 on Saturday to lead Clemson to a nine under par 279 team score and an improvement to 10th place out of 15 teams at the Golf Club of Georgia Collegiate in Alpharetta, Georgia. Clemson improved its standing from 12th to 10th with the season best tying nine-under par score.

The 15 teams will play the final round on the par 72 course on Sunday. The field is among the strongest in the nation this year as five of the top six teams, and 13 top 50 teams will compete for the 12th annual title.

Wake Forest shot a 17 under par 271 on Saturday to vault into the team lead at 23 under par. Clemson stands at nine under par 567 for the first 36 holes. While Clemson is in 10th place, the Tigers are just four shots out of fifth place.

Cottam’s 66 included six birdies and no bogeys. He now has 12 birdies through two rounds, tied for fourth in the field of 78 golfers. He was three under par on each nine in recording his third straight round in the 60s.

Cottam is by far Clemson’s top golfer through 36 holes with a nine under par score of 135, good enough for fourth place. He had a third place finish earlier in the year at Trinity Forest.

Doc Redman had a two under par 70 on Saturday to help Cottam. The sophomore had four birdies and a double bogey and has a 36 hole score of 143, good enough for 39th place. Bryson Nimmer slipped to an even par 72 on Saturday and also stands in 39th place at one under for 36 holes.

Turk Pettit was Clemson’s third best golfer on Saturday with a one under par 71 and is at three over par through 36 holes. Colby Patton was the non counter with a 73 on Saturday.