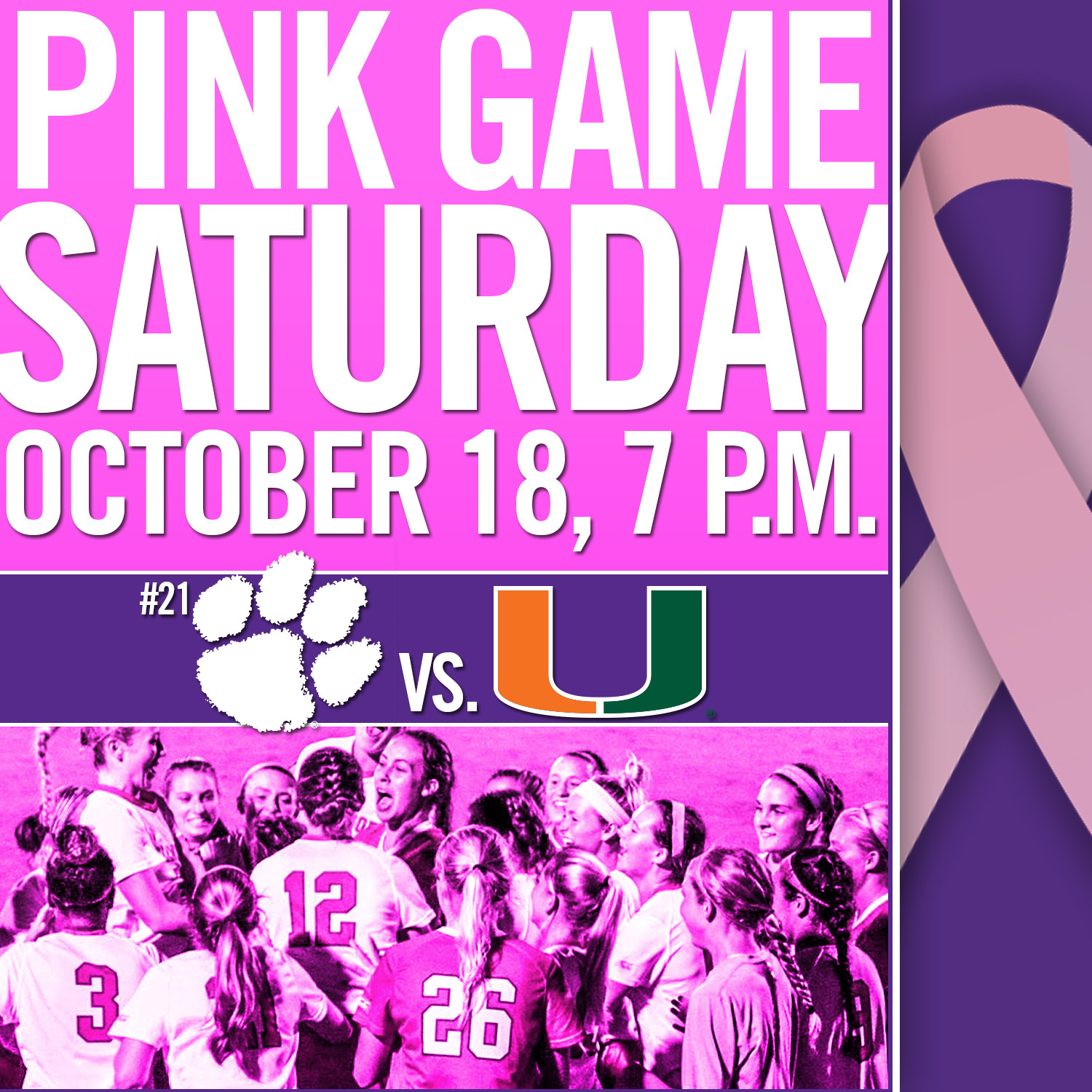 CLEMSON, S.C. – The 21st-ranked Clemson women’s soccer team hosts Miami on Saturday, Oct. 18, at 7 p.m. at Historic Riggs Field. The game, which will be broadcast on TigerCast, is designated as a Pink Game, in which the Tigers will raise awareness and funds for breast cancer research.

At the game, there will be giveaways of pink items and a silent auction of the pink jerseys worn by the Tigers during the game, as well as other autographed items. Fans will also be able to purchase Clemson-branded Frisbees for $1, and then will be able to participate in a halftime contest with the winner receiving a package of Clemson items and gift cards to local business. Donations can be made to Red Card Cancer (http://redcardcancer.org/donate/) on behalf of the Clemson women’s soccer team.

Clemson is 10-2-2 overall and 3-2-1 in ACC play, and is coming off a 1-0 win over Syracuse on Oct. 12at Historic Riggs Field, in which sophomore defender Claire Wagner netted the game’s lone goal.  The Tigers are led in scoring by sophomore midfielder Catrina Atanda, who has six goals and 13 points on the season. Four Tigers have at least 10 points on the season and 12 different players have scored at least one goal.

Freshman forward Shannon Horgan leads the team and is tied for fourth in the conference with six assists on the season. Sophomore goalkeeper Kailen Sheridan posted 30 saves and six solo shutouts, while allowing just eight goals in over 1133 minutes in goal for the Tigers.

The Hurricanes are 2-11-1 overall and 0-5-1 in the ACC. They are led by senior midfielder Erin McGovern who has five points on the season. The Hurricanes are coming off a 5-0 loss at #11 Notre Dame. Senior Emily Lillard leads the Canes in goal, having played every minute of play this season. She has 66 saves and has allowed 29 goals.

Clemson and Miami have met 10 times with the Hurricanes leading the series 7-2-1. In the 2013 meeting between the two programs in Coral Gables, Miami bested the Tigers 2-1. Wagner scored Clemson’s lone goal in the contest, with Atanda assisting on the play.