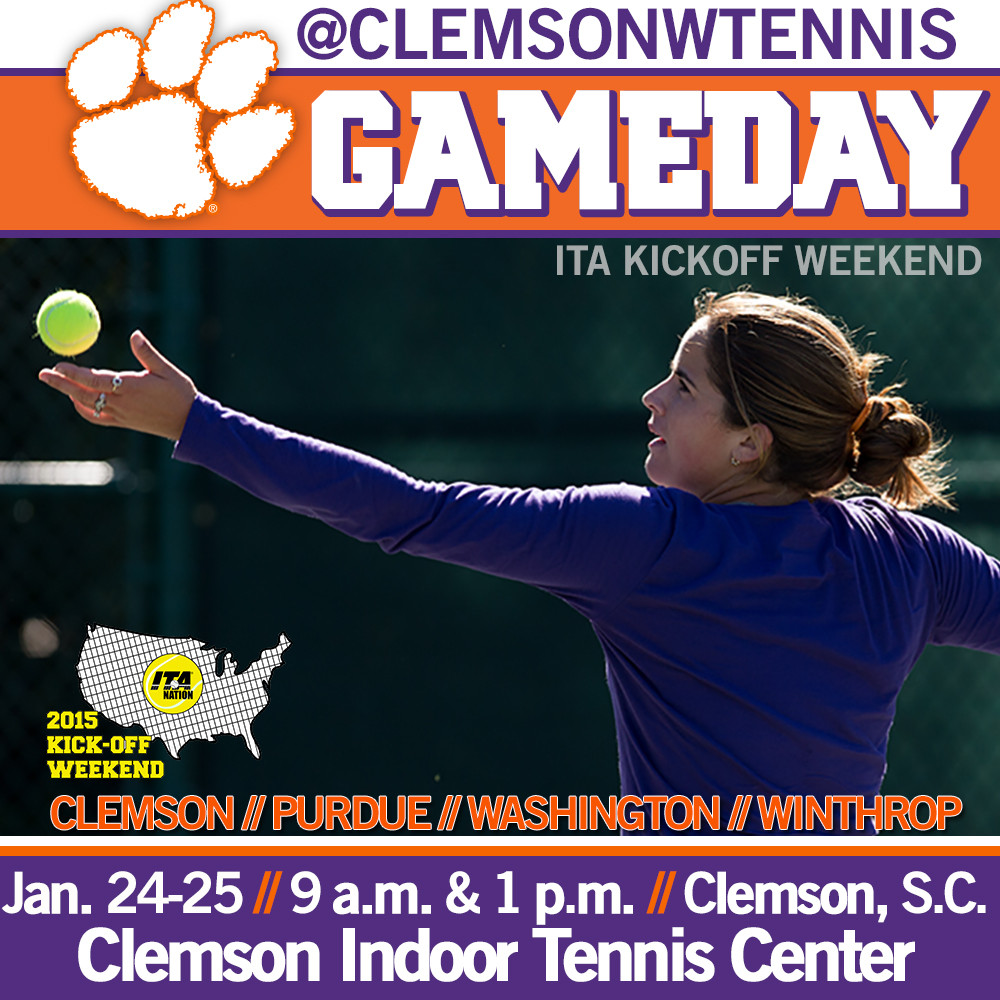 CLEMSON, S.C. – The 14th-ranked Clemson women’s tennis team hosts 40th-ranked Purdue, 42nd-ranked Washington and Winthrop in the ITA Kickoff Weekend Saturday, Jan. 24 and Sunday, Jan. 25 at the Clemson Indoor Tennis Center. Live scoring will be available on ClemsonTigers.com, and updates will also be provided on Twitter @ClemsonWTennis. Admission to the tournament is free for patrons.

On Saturday, second-seeded Purdue and third-seeded Washington match up at 9 a.m. followed by Clemson and the fourth-seeded Winthrop Eagles taking the courts at 1 p.m. On Sunday, the consolation match is set for 9 a.m., while Saturday’s two winners meet in the championship match at 1 p.m., with a berth in the ITA Team Indoor Championships in Charlottesville, Va. on Feb. 5-8 on the line.

Clemson is coming off a strong performance in the Duckworth Winter Classic on Jan. 17-18. Clemson players were 16-2 in singles play and 10-1 in doubles matches in the two-day event, and won flight championships in all four singles flights and all three doubles flights. Joana Eidukonyte (27th) and Romy Koelzer (85th) are both ranked by the ITA in singles, while the doubles duo of Beatrice Gumulya and Jessy Rompies is ranked second nationally.

NOTE: Boxscores from all four matches will be available at the links above once available.

Scouting PurduePurdue comes in ranked 40th in the country, most recently competing in the Purdue Invite last weekend. The Boilermakers took two of three doubles matches and split, 3-3, in singles play against opponents from Denver, DePaul and Drake.

Clemson is 5-0 against Purdue all time, most recently defeating the Boilermakers in 2012. All five meetings between the two teams have been played in Clemson.This is the third time in four years that the Boilermakers will be hosted by Clemson in the ITA Kickoff event.

Scouting WashingtonWashington is tied for 42nd in the latest ITA rankings. The Huskies are 2-1 on the season, most recently falling to Ole Miss 6-1, befor defeating Hawaii 5-2, on Jan. 17 and Jan. 18, respectively.

Clemson and Washington have matched up once previously, resulting in a win for the Tigers in 2004.

Scouting WinthropWinthrop enters the tournament at 1-0, coming off of a 7-0 loss to Wake Forest on Jan. 19. The Eagles were nabbed as the preseason favorite to win the Big South Conference, and are led by returning All-Big South performers Alice Garcia and Caitlin Cridland, both juniors.

Clemson holds a 7-0 advantage in matchups with Winthrop, all played in Clemson, with the Tigers’ most recent victory coming in 2012.