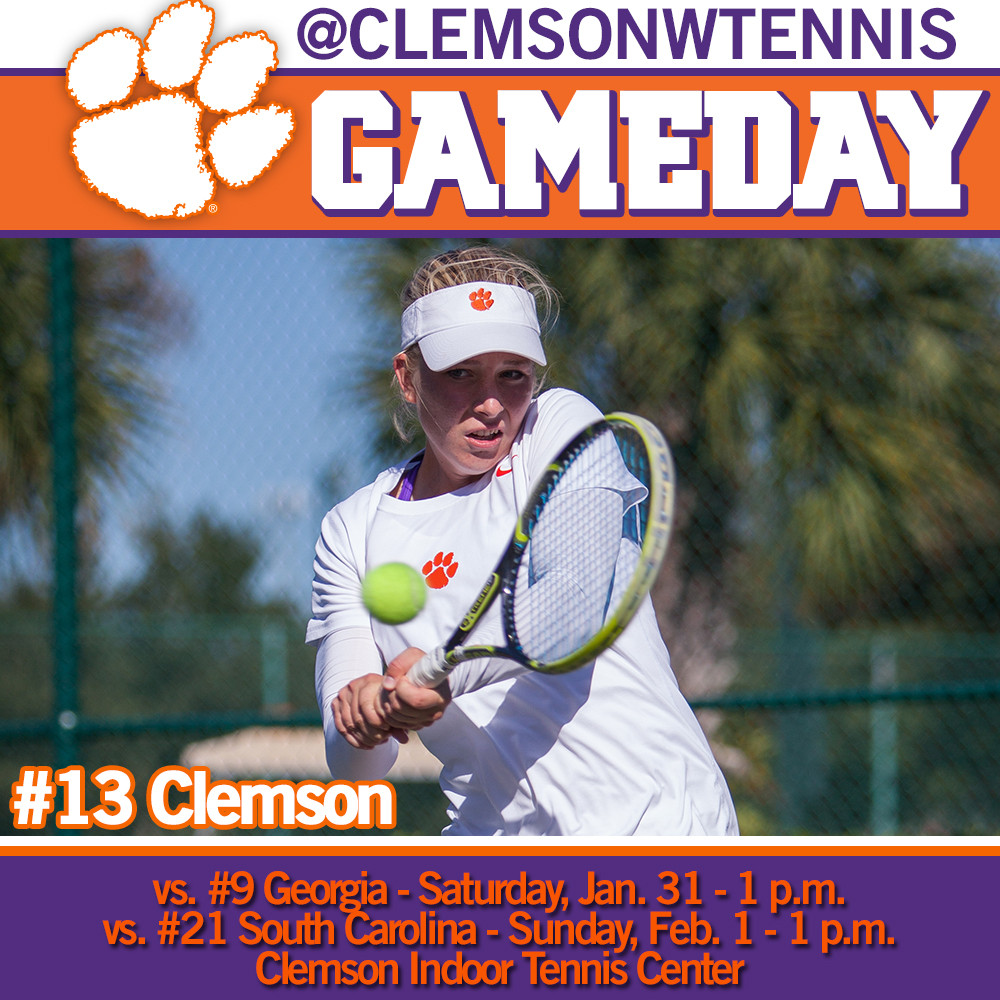 CLEMSON, S.C. – The 13th-ranked Clemson women’s tennis team, coming off of two wins in the ITA Kickoff, hosts two rivals, both ranked in the top 25, this weekend at the Clemson Indoor Tennis Center. On Saturday, the Tigers match up with ninth-ranked Georgia at 1 p.m. and on Sunday, Clemson squares off with South Carolina, ranked 21st by the ITA. On Saturday, the first 100 fans will receive a free t-shirt and on Sunday, free pizza will be provided to the first 75 fans. Live scoring will be available for both matches on ClemsonTigers.com and fans can also follow @ClemsonWTennis on Twitter for updates. Admission is free to the public.

The Tigers are 2-0, most recently defeating Winthrop, ranked 66th when the two teams met last week, and now currently tied for 67th, and Purdue, which improved from 40th in last week’s poll to 38th this week. The Tigers defeated the Eagles 6-1 and the Boilermakers 5-0 to win the ITA Kickoff event, guaranteeing Clemson’s spot in the ITA Team Indoors held in Charlottesville, Va. Feb. 6-9.

The Tigers have two singles players and one doubles team ranked by the ITA. Junior Joana Eidukonyte is ranked 27th and senior Romy Koelzer is ranked 85th, while the doubles duo of Beatrice Gumulya and Jessy Rompies is ranked second nationally with a 14-1 record. Rompies earned ACC Player of the Week last week after going 2-0 in singles, including one win over a ranked player, and 2-0 in doubles.

Scouting #9 GeorgiaThe ninth-ranked Georgia Bulldogs are 2-1 on the young spring season, most recently recording wins over No. 71 Samford and No. 28 Auburn in the ITA Kickoff Weekend. The Bulldogs have three ranked players, including senior Lauren Herring who was named SEC Player of the Week this week. Herring is ranked 19th while teammates Silvia Garcia and Hannah King are ranked 83rd and 91st, respectively. The doubles team of Perez and Gould is ranked 43rd.

The Tigers and the Bulldogs have matched up 48 times with Georgia holding a slight advantage 26-22. The last time the two teams met in Clemson, Feb. 2, 2013 the 6th ranked Bulldogs bested No. 19 Clemson 5-2.

Scouting No. 21 South CarolinaSouth Carolina, ranked 21st, is 4-0 on the season, most recently defeating New Mexico 5-2 on Jan. 25. The Gamecocks have two players listed in the singles rankings, as senior Meghan Blevins is ranked 99th and senior Elixane Lechemia is 120th. The duo of Blevins and Folland is 33rd, while their teammates Cochran and Dailey are ranked 58th in doubles.