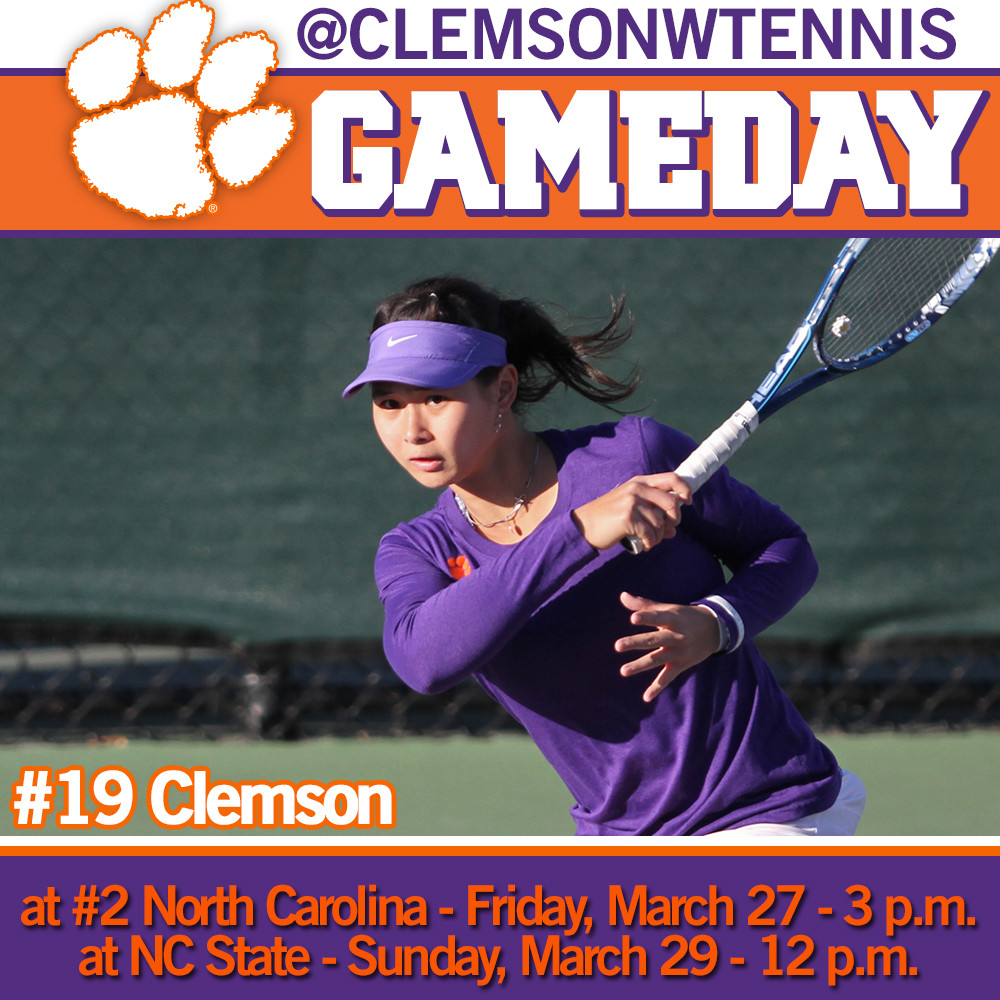 CLEMSON, S.C. – The 19th-ranked Clemson women’s tennis team hits the road to face No. 2 North Carolina on Friday, March 27 at 3 p.m. in Chapel Hill and NC State Sunday, March 29 at noon in Raleigh. Live stats for Friday’s match will be available on GoHeels.com and live video and live stats can be found on GoPack.com for Sunday’s match. Fans can follow @ClemsonWTennis on Twitter for updates as well.

The Tigers are 10-6 on the season and 5-2 in the ACC entering the matchup with the Tar Heels. Clemson has two doubles teams and four singles players ranked in the latest ITA poll. The doubles duo of Beatrice Gumulya and Jessy Rompies is ranked third nationally with a 23-2 record. Joana Eidukonyte is the highest ranked Tiger singles player at No. 19. Eidukonyte is 25-5 on the season and 6-1 against conference opponents. Senior Romy Koelzer, named ACC Player of the Week after defeating the top-ranked singles player in the nation last Friday, is ranked 35th, while Gumulya and Rompies are ranked 84th and 119th, respectively.

Scouting North CarolinaNorth Carolina, ranked No. 2 nationally, is undefeated at 19-0 and 7-0 in the conference. The Tar Heels are coming off of a 7-0 sweep of Wake Forest. The Heels have five ranked singles players, all in the top 78, including three in the top 20. They also have three ranked doubles duos, at No. 13, No. 33 and No. 34.

The Tigers are 38-18 overall against the Tar Heels and 12-7 in matches played in Chapel Hill. In the last meeting between the two programs in 2014, No. 17 Clemson upset No. 7 North Carolina 4-3 in Clemson.

Scouting NC StateNC State is 9-8 overall and 0-6 in conference play. The Wolfpack are coming off a 5-2 loss to Florida State, and are set to face Notre Dame on March 27 before Sunday’s meeting with the Tigers.

Clemson has a 41-4 advantage in the series against the Wolfpack and a 16-2 record in matches played in Raleigh. In 2014, the last meeting between the two programs, Clemson defeated NC State 7-0 in front of a home crowd.