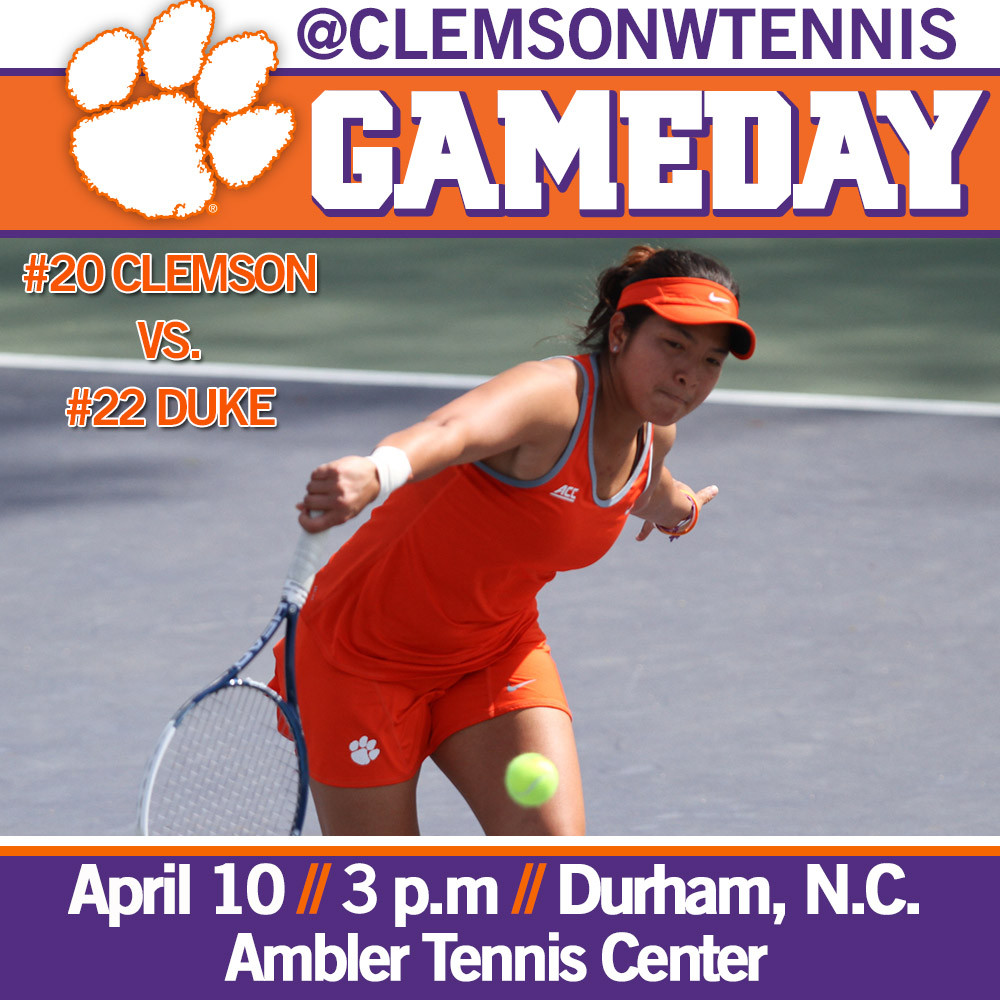 CLEMSON, S.C. – The 20th-ranked Clemson women’s tennis travels to Durham for a conference match with No. 22 Duke on Friday, April 10 at 3 p.m. The match is the Tigers’ final road match of the season as the team concludes the regular season with two home conference matches on April 12 and April 17. Live stats will be available on GoDuke.com and fans can follow @ClemsonWTennis on Twitter for updates as well. Live video is also available on GoDuke.com, however, a subscription is required.

Clemson is 13-7 on the season and 8-3 in the ACC entering the match against the Blue Devils. The Tigers have three singles players ranked in the most recent ITA singles poll. Joana Eidukonyte, at 15th, is Clemson’s highest ranked player. The junior from Lithuania is 29-5 on the season and is on an eight-match winning streak entering Friday’s contest. She is 10-1 in ACC play.

Romy Koelzer (33) and Beatrice Gumulya (64) also represent the Tigers in the latest poll. Koelzer is 16-9 on the season and has seven conference wins, playing primarily in the top singles spot for Clemson. Gumulya enters the match at 23-8 and is on a five-match winning streak.

The doubles team of Gumulya and Jessy Rompies is ranked third overall with a 25-4 record. Eidukonyte and her partner Daniela Ruiz are also ranked in the doubles poll, coming in at No. 74. The duo is 17-4 and undefeated against nationally-ranked opponents.

Scouting DukeDuke, ranked No. 22, is 13-7 on the season and 8-2 in the conference. The Blue Devils are coming off of a 4-0 win over Florida State on April 3. Duke claims four players in the singles poll as Ester Goldfeld (41), Samantha Harris (73), Beatrice Capra (103) and Rachel Kahan (109) are all ranked. Goldfeld leads the team with 23 victories, including 13 in dual matches. The duo of Capra and Harris comes in at No. 53 in the doubles poll while Harris and Annie Mulholland are ranked 57th.

The matchup between the Tigers and Blue Devils will be the 50th all-time meeting between the programs. Duke holds a 28-21 advantage overall. The two teams met three times in 2014 with Duke edging the Tigers in two of the three meetings. Clemson took the regular season matchup 4-3 in Clemson, when the Blue Devils were ranked number-one in the nation, but Duke defeated the Tigers 4-0 in the ACC Tournament and 4-1 in the Round of 16 of the NCAA Tournament.