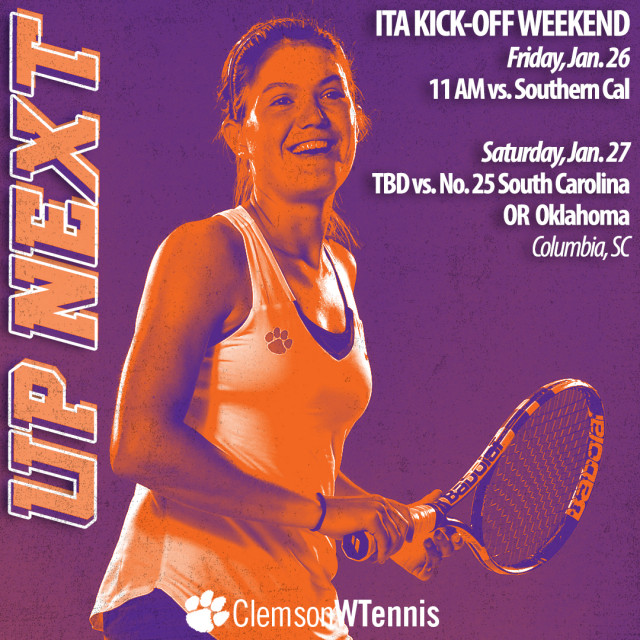 Who: Clemson vs. Southern Cal

Match Information vs. No. 25 South Carolina/Oklahoma

Who: Clemson vs. No. 25 South Carolina/Oklahoma

– Clemson opened the season with two wins last Saturday at the Duckworth Doubleheader, defeating Charleston Southern 7-0 and Appalachian State 4-0. The Tigers were a combined 9-0 in singles play and 5-0 in doubles play and did not lose a single set in the two matches.

– Daniela Ruiz is the lone senior on the team, and is the Tigers’ team captain for the second-straight season.

– Ruiz was named an NSCA All-American Strength & Conditioning Athlete of the Year in 2017, and was a doubles specialist for the Tigers last spring, with an 18-3 record in dual matches and a 10-1 record in ACC play.

– Leduc had an impressive fall 2017 season, in which she was 9-3 in singles play and reached the quarterfinals of the Oracle ITA National Fall Championships and the semifinals of the ITA Carolinas Regional.

– Juniors Fernanda Navarro and Ally Miller-Krasilnikov and sophomores Constanza Gorchesand Sydney Riley, are also back for the Tigers in 2018.

– Tate Schroeder, a sophomore from Centennial, Colo. and transfer from Mizzou, and Laura Marti, a freshman from Madrid, Spain, are the team’s two newcomers.