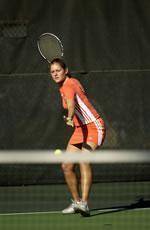 While the university is on spring break, the 19th-ranked Clemson women’s tennis team (10-6) will travel to California for three matches in five days. On Tuesday, Mar. 22 the Tigers and Toreros of San Diego will match-up at 10:00 am PST. Clemson will then meet Sacramento State in San Diego on Thursday, Mar. 24 in an 11:00 am PST match. The Tigers then conclude their trip with a match against Pepperdine on Saturday, Mar. 26 at 11:00 am PST.

Clemson and San Diego have met on four previous occasions, with each team winning two contests. They last met during the 1992 season. The Tigers won the match in San Diego by a score of 4-3 to take a 2-1 lead in matches played on the Toreros’ home court.

The match against the Sacramento State Hornets will be the first time the two schools have met.

The Tigers hold a 3-0 advantage in the series score over the Pepperdine Waves, and they are 2-0 in matches played in Malibu, CA. Clemson won the last meeting between the two schools in 1987, in Provo, UT, by a score of 5-4. The Tigers also won the last contest in Malibu in 1983, 7-2.

Senior Julie Coin leads the Tigers 2005 campaign. She is ranked second in the nation in the ITA singles poll and has compiled a 24-2 overall mark. Coin is undefeated in dual action at 15-0 and boasts a 17-0 mark against ranked opponents.