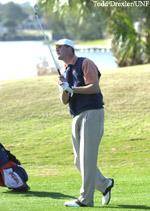 Tigers Fourth After Day One of Puerto Rico Classic

Trahan is tied for the lead after the first round with Fernando Machareffe of NC State, who also shot a three-under-par score for the opening round. The par 72 course that is 6945 yards in length was challenging to the field of 18 teams and 90 individuals. Only nine of the 90 golfers shot even par or better for the first day.

Trahan continued his outstanding season. The senior, who has led Clemson to a number-one ranking in all three polls at this point in the season, is coming off an individual victory at the Mercedes Benz Collegiate at Sawgrass in Ponte Vedra, FL. He had a five-under 67 in the final round of that event so he is now eight under par for his last two rounds. It was his sixth round in the 60s this year and the 36th of his Clemson career, more than any golfer in school history.

NC State holds the team lead with an even par 288 team score. Defending NCAA Champion Minnesota and perennial national power Oklahoma State stand tied for second at 291. Oklahoma State will be the host school for the NCAA Championships in May. Clemson is fourth at 293, while Texas is fifth at 296.

Trahan was the only Clemson player at par or better on Sunday. Matt Hendrix shot a one-over par 73 and stands in a tie for 10th place. Gregg Jones, Clemson’s second best player at the Mercedes Benz, is tied for 17th individually with a 74. Jack Ferguson and Ben Duncan both shot rounds of 77 on Sunday.

The teams will be back on the course on Monday and Tuesday to complete the 54-hole event.