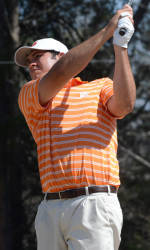 CLEMSON, SC – McCuen Elmore and Corbin Mills combined for five birdies over the last three holes to lead Clemson to a third-place finish in a strong 17-team field at the Insperity Augusta State Invitational on Sunday. Clemson finished with a five under par score of 859 for the 54 holes.

The event was Clemson’s last regular season tournament prior to the ACC Tournament at The Old North State Club in Uwharrie Point, NC, April 22-24. It was the second straight strong performance for Larry Penley’s team, who won the Furman Invitational by 12 shots in their previous tournament.

Oklahoma State won the event with a team score of 849, one shot better than Tennessee. Clemson was third at 859, while third ranked Alabama was fourth at 863, one under par.

It was a successful tournament for the Tigers, who beat second ranked UCLA by seven shots, the third ranked Crimson Tide by four, sixth ranked Illinois by 18 and 13th ranked and defending NCAA Champion Augusta State by 12. Clemson also beat state rival South Carolina by 28 shots and the Tigers are now 3-0 this year in head to head tournaments against South Carolina.

Clemson and Alabama were tied for third with three holes to play. But, the Tigers finished strong, playing the last three holes at four under par as a team. Elmore was especially clutch with birdies on the 16th, 17th and 18th holes to finish with an even par 72. Mills made birdies 16 and 17 and made par on 18.

Mills had the top round of the day with a three under par 69 thanks to five birdies and two bogeys, and his 215 score for the 54 holes was 10th best in the field of 93 players.

Classmate Crawford Reeves had a one under par 71 on Sunday thanks to a clean round of 15 pars, two birdies and one bogey. His even par 216 was good enough for 12th in the field. He had an opening round 68 on Saturday that tied his career best round. He had 13 birdies for the 54 holes, most among the Tigers players.

Elmore had an even par 72 on Sunday thanks to the strong finish and his 218 score was fourth best among Tigers and 25th best in the field. He had 11 birdies for the event, second to Reeves 13. Junior Jacob Burger had a 72 on Sunday and finished at 217, good enough for 18th.

Freshman Thomas Bradshaw had a 73 on Sunday and finished with a 225 score for the tournament. Bradshaw opened with an 82, but played the last 36 holes in one under par and saw his score count both rounds towards the Clemson team score. He was under par the entire round on Sunday until he made a double bogey on the 18th hole.

Alex Boyd played the event as an individual and had rounds of 69-75-75 to finish at three over par 219, tied for 30th place. The highlight of the weekend in his hometown was a double eagle two on the 557-yard par five 17th hole in the first round on Saturday. It was the first double eagle in Clemson history in tournament play.