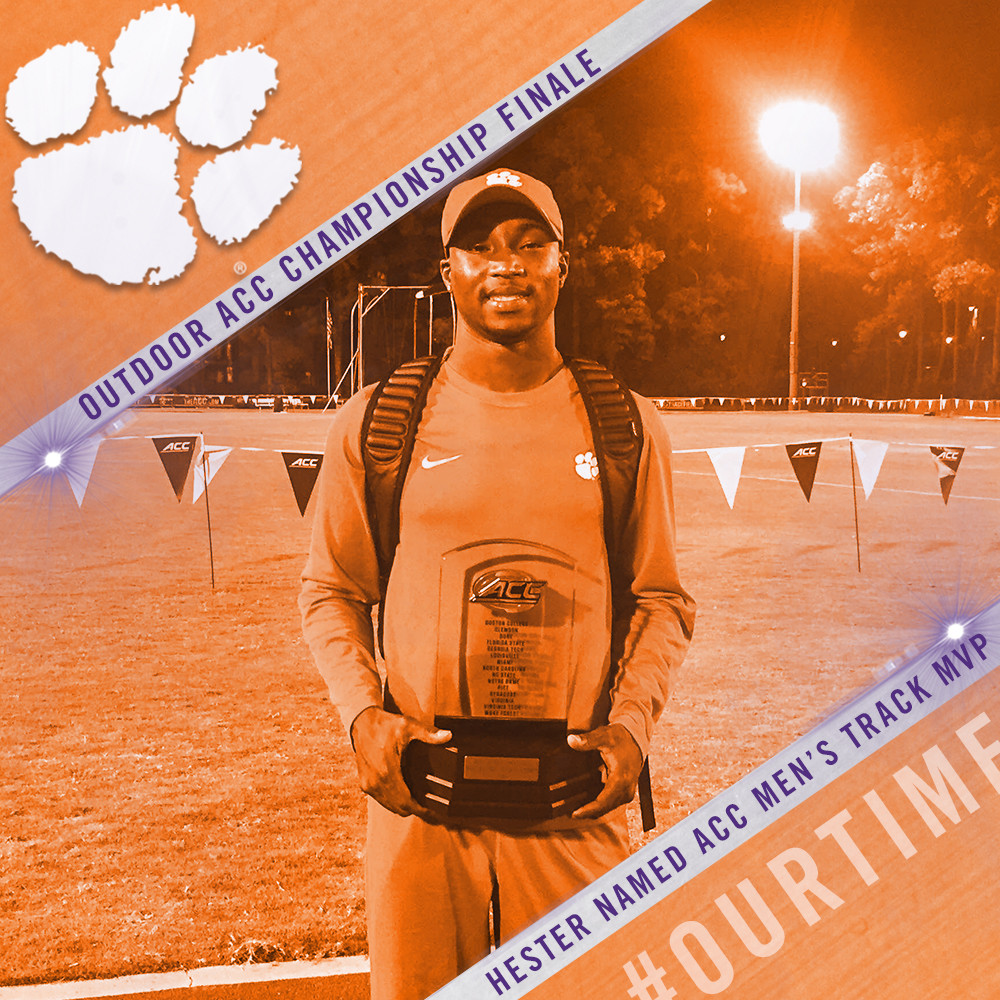 “Our women’s team exceeded expectations, based on who we had available at the meet,” said head coach Mark Elliott. “They competed hard and earned a maximum number of points. Deja Parrish and Mimi Land were our most outstanding women’s performers, but we think we have a bright future with the likes of Ersula Farrow and Markeeta Thomas who scored big today. We have much to look forward to in the years to come.”

In his final ACC Championship, Tevin Hester earned the Men’s Track MVP award and became the first men’s sprinter in the ACC to sweep the 100m and the 200m dash in back-to-back years since 1987-88. He is only the fourth Tiger in program history to win seven individual ACC titles.

“Tevin was the man of the meet,” said Elliott. “A few injuries derailed our chances as a team, but the men put it on the line and gave it all they had.”

Hester kicked off the day clocking in at 10.01 in the 100 meter dash to win his second-straight ACC Championship in the event. He later came back to win the 200 meter dash as well with a personal best, meet record time of 20.13. The time is also good enough for second on Clemson’s all-time list, positioning him behind Olympic gold medalist, Shawn Crawford.

On the women’s side, Mimi Land led the way winning her first ACC title with a height of 5-10 in the high jump. She struck again later in the triple jump, placing fifth with a season best 40-10.5. The senior scored in 21 of the 24 ACC Championship events she competed in over an outstanding career, scoring a total of 97.5 points.

Anasterasia Terrell had the triple jump won until a protest declared Georgia Tech the champion and Terrell the runner-up. Her personal best leap of 43-6.5 places her fourth all-time in Clemson history. Right behind her was Iana Amsterdam in third place with a season best jump of 43-3.25.

Deja Parrish did it all on the track, placing fourth or better in each of the four races she competed in. Her effort was highlighted by a second place finish in the 200 meter dash with a personal best time of 23.08, placing her eighth in program history. She also ran a personal best 52.80 in the 400 meter dash to take fourth place and advance to sixth in Clemson history.

Each of the four relay teams also landed on the podium, highlighted by the women’s 4×100 meter relay team’s second place finish. Parrish ran the second leg alongside Torie Robinson, Ranee Ricketts and Taylor Williams to finish with a season best 44.12.

Parrish later anchored the 4×400 meter relay to a season best 3:35.16 with Olivia James, Markeeta Thomas and Tanisha Coppin. Together, the team finished in third place.

Hester ran the third leg of the third place 4×100 meter relay team. The senior teamed up with Michael Cheeks, Cordell Lamb and Ishmael Kamara for a season best time of 40.21. Lamb and Cheeks then came back to assist John Lewis and Jorel Bellafonte to win bronze in the 4×400 meter relay.

Reaching the podium in the 800 meter run for the first time in her young career, Ersula Farrow clocked in at 2:04.13 to take third place. The freshman’s personal best hoists her to third all-time in program history. Coppin also scored in the event, taking seventh with a time of 2:07.76.

James and Thomas also found success earning second team All-ACC honors in the 400 meter dash and the 400 meter hurdles. James took sixth place in the 400m with a time of 53.94. Thomas ran 1:00.07 to take fifth place as a freshman.

In the men’s 400 meter hurdles, Deron Gordon just missed the podium with a fourth place, 51.67. Bellafonte finished right behind him in fifth place at 52.20.

Next, the Tigers will take their NCAA regional qualifiers to Jacksonville, Fla., for the NCAA East Preliminary Round. The meet will take place from Thursday, May 26 through Saturday, May 28.