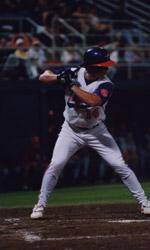 Thanks to some timely hitting and three hits along with three RBIs from junior college transfer L.J. DeMaino, Clemson downed Maine 8-3 Saturday to finish off the series sweep. Kyle Frank added three hits and Steve Reba picked up his sixth win in as many starts this season to up Clemson’s record to 18-1. Maine fell to 9-5 with the loss.

After Clemson took a 1-0 lead in the first inning, Maine plated a run in both the second and third innings. Aaron Izaryk’s RBI single in the second and Pat Tobin’s run-scoring single gave the Black Bears a 2-1 lead.

After tying the score in the fifth inning, Clemson took a commanding lead in the sixth inning. Michael Johnson extended his hitting streak to 16 games when he lead off the sixth with an opposite-field homer, his 11th of the year. Five batters later, DeMaino provided two insurance runs with a single to center. DeMaino’s three hits and three RBIs were both personal career bests as a Tiger.

Clemson added a run in the seventh inning on an errant throw to second on Johnson’s stolen base, plating shortstop Khalil Greene. The Tigers upped their lead to 8-3 in the eighth inning on another DeMaino RBI single and a sacrifice fly by Greene. The RBI gave the senior shortstop 218 in his career, tying Jim McCollum’s Tiger record.

Meanwhile, Reba struck out five batters in the first two innings (and eight overall), while allowing three unearned runs and five hits in 7.0 innings. Clemson pitchers did not allow an earned run in the three-game series with Maine, as the Tiger staff lowered its ERA to 3.40.

Black Bear starter Mike MacDonald (2-1) suffered the loss, as he allowed three earned runs and nine hits in 6.0 innings of work. Six Maine batters each had a base hit.

Clemson will play host to Coastal Carolina Tuesday, March 26 at 7:15 in its next action.