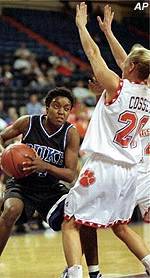 CLEMSON, S.C. – Lauren Rice scored 17 points, including 13 in the first half, to lead eighth-ranked Duke to a 59-44 victory over Clemson at Littlejohn Coliseum Monday night. Duke improved to 22-4 overall, 11-3 in the ACC, while Clemson lost its third in a row against a ranked team, and is now 16-10 overall, 7-7 in the ACC.

Clemson has two regular season games remaining, at Wake Forest on Thursday and at home against Florida State on Sunday. It was Duke’s first win at Clemson since the 1995-96 season. The win gave Duke a sweep of the regular season series.

Clemson scored just 44 points in the game, its low total of the regular season. Clemson’s previous low was 51 points at Durham in the first meeting between the two teams.

Clemson shot just 23.1 percent from the field for the game, its second lowest single game field goal percentage in history and worst since 1977. Clemson made just 1-11 three-point goals, while Duke made 7-19 and thus had 18 more points from three-point scoring. The Lady Tigers stayed in the game with a 14-25 advantage in turnover margin.

Rice had the double-double to lead Duke. The senior from Peru, IN had 17 points and 11 rebounds. Rochelle Parent had just two points, but also had 13 rebounds. Georgia Schweitzer had 14 points to help Rice. LaNedra Brown had nine points, all in the second half for the Blue Devils, who out-rebounded Clemson 46-38.

Clemson was led by Erin Batth, who had 14 points and 11 rebounds, her sixth double-double of the season. Chrissy Floyd added 10 points.

Clemson trailed by just five points at 45-40 with six minutes left, but Duke went on a 14-4 run to end the game.

Duke took a seven-point lead at intermission. Rice was the top player in the first half for both teams. The Duke forward made 3-4 three-point shots and scored 13 points. Georgia Schweitzer contributed six more as Duke outshot Clemson 43.5 percent to 22.6 percent.

Clemson was led in the first half by Batth, who scored 10 points on four field goals and a pair of free throws. Clemson stayed close by hitting 7-8 free throws.

Duke opened to a 10-2 lead in the first five minutes of the game. Rice scored five of those 10 points. She then guided Duke to a 18-8 lead 10 minutes into the half by scoring five more points in succession. Clemson made just four of its first 17 shots from the field, contributing to the 10-point Duke lead.

Clemson battled back to 24-20 with just a minute left before intermission behind Batth, who scored above her season average of nine points within the first half. She also contributed six first-half rebounds.