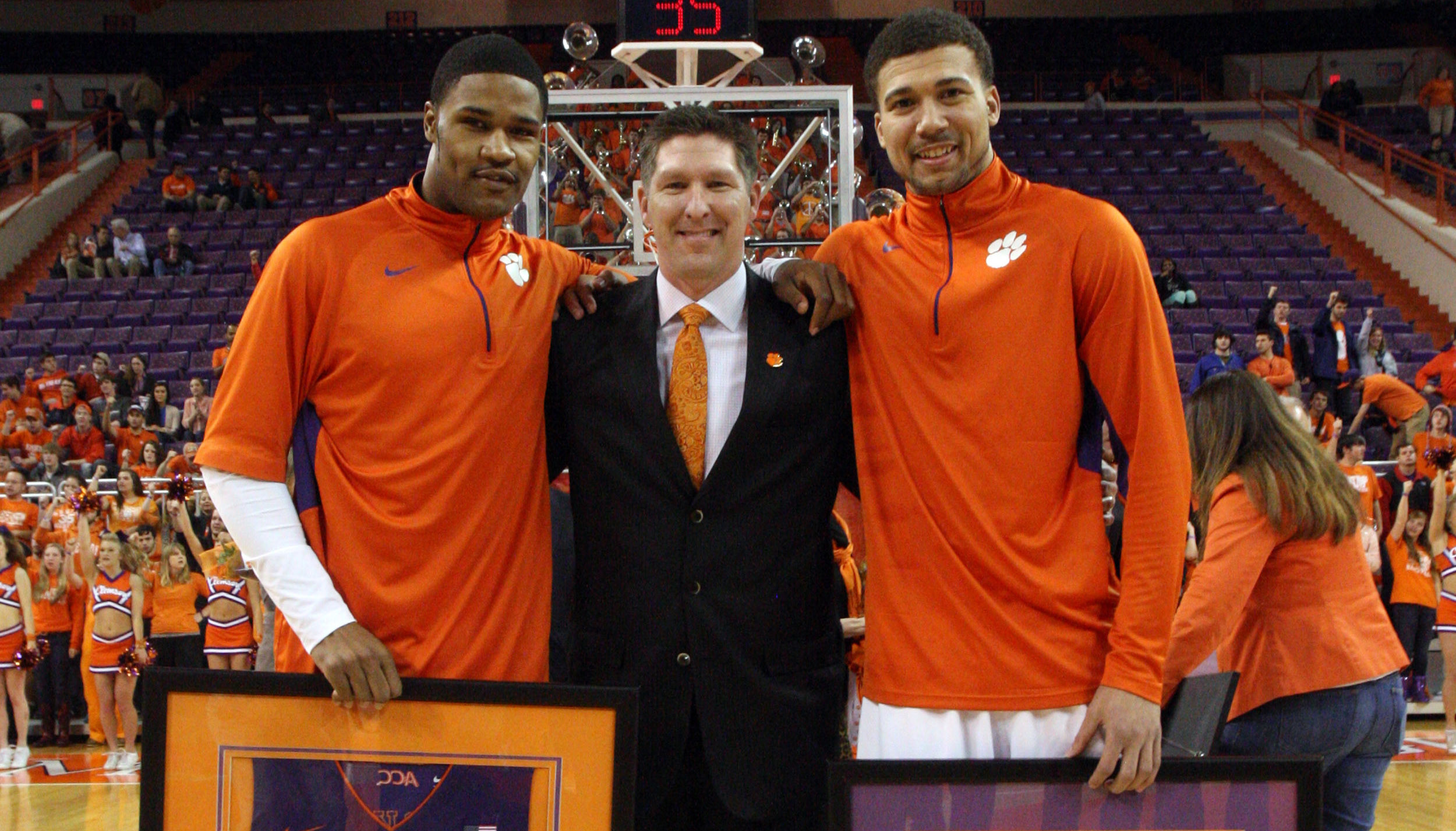 CLEMSON, SC – Clemson saw its eight-game winning streak on Senior Night snapped Tuesday after Boston College utilized a 12-0 run midway through the second half in a 68-61 win at Littlejohn Coliseum. The Eagles moved to 6-11 in ACC play with the win, 14-16 overall. Clemson fell to 13-16, 5-12 in league play.On a night when Clemson honored seniors Devin Booker and Milton Jennings, the duo did not disappoint in terms of productivity. Booker posted 19 points to lead the Tigers, while Jennings had 18 on his own. The two were a combined 16-of-28 from the floor. Booker grabbed eight rebounds while Jennings collected seven. Damarcus Harrison was the only other Tiger in double figures with 11. Clemson struggled to shoot the ball from long range for a third consecutive game, converting just 3-of-16 from beyond the arc.Boston College shot 60 percent in the second half and overcame a two-point deficit at the half to grab the win. The Eagles consistently drove the ball to the basket in the second half, creating fouls or layups against the Tiger defense. Olivier Hanlan, the highest scoring freshman in the ACC, had a game-high 24 points. Ryan Anderson had a double-double in support with 18 points and 11 rebounds.Clemson started the game by scoring the first seven points, five by Jennings. The Eagles then scored the next seven to knot the game at the 16:07 mark. Clemson extended its lead to as much as seven at 23-16 on a free throw by Booker. But BC responded with an 11-6 run to close out the opening half, the last on a layup by Anderson with 40 seconds remaining.The Eagles tied the game four separate times in the opening five minutes of the second half before ultimately taking the lead for good with 8:46 to go on another layup by Anderson. Down 46-43, BC scored 12 straight points to take control. Hanlan and fellow freshman Joe Rahon scored four apiece during the run. With 5:13 left, the Tigers were suddenly down nine points.Clemson tried to rally late, whittling the lead down to three at 60-57 after its pressure defense paid dividends. Following Booker’s free throws at that point, Hanlan made the shot of the game when he rose up and buried a 15-footer to all but put the game away.The Tigers close out the regular season of the ACC on Saturday at Miami, the top team in the conference standings. The game is scheduled for a 2:30 PM start and will be televised by the ACC Network.