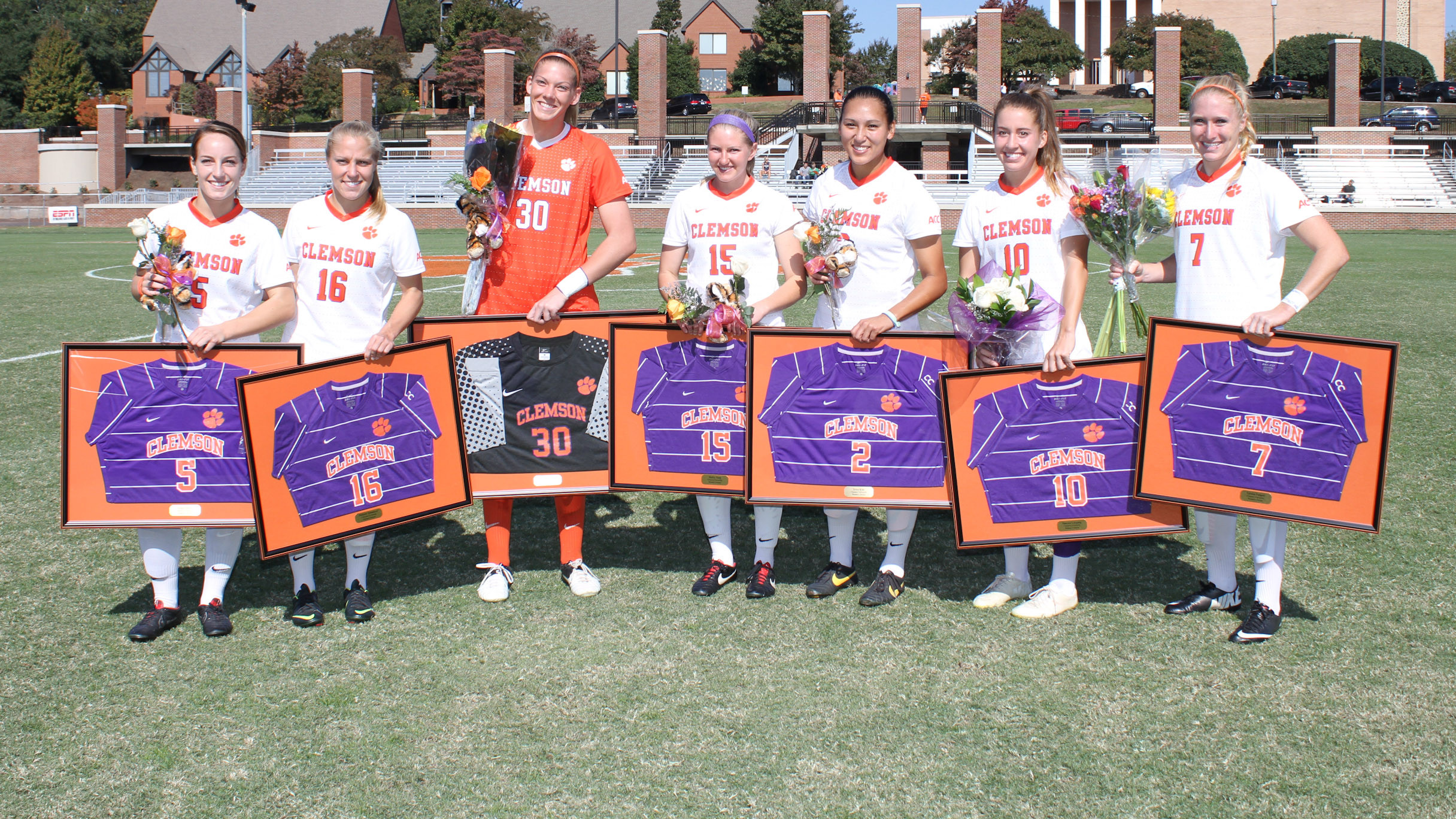 CLEMSON, SC – The Clemson women’s soccer team concluded its 2013 regular season home schedule with a 2-0 loss to #12 Notre Dame Sunday afternoon at Historic Riggs Field.  For the Tigers, it was their sixth contest against an opponent ranked 19th or better nationally in the last eight games.  The loss drops the Tigers to 7-7-4 (4-6-2 ACC) while the Fighting Irish improve to 11-5-1 (7-4-1 ACC).

“There was no fault in our effort today,” said head coach Eddie Radwanski.  “We played hard, but we just didn’t play well, and Notre Dame played very well today.  The strength of their team is in the midfield and we just didn’t have an answer for that.  Even though we weren’t playing our best, I’m proud that the team never quit and kept battling until the end.

“Playing such good teams, such highly ranked teams, is just a part of being in this conference, and we have been competitive in all of our games this season, which is something to feel good about.  We have won some good games, and we have lost a few that we wish we could have back.  And we still have one regular season game left on Thursday at Miami, which is an important one for us.”

Notre Dame scored early in the first half, at the 7:12 mark, when Mandy Laddish sent a cross from the right side that was headed into the net by Kaleigh Olmsted.  The Tigers held the Irish scoreless for the remainder of the frame.  For the half, Notre Dame had a 7-4 advantage in shots, including a 3-2 advantage in shots on goal.  Tiger keeper Kailen Sheridan and Irish keeper Kaela Little each posted two saves in the period.

Clemson doubled its offensive production in the second half firing eight shots, three of which went on net, yet Little was there for the Irish and kept the Tigers off the scoreboard.  Notre Dame was able to capitalize again at the 58:01 mark when Crystal Thomas scored her third goal of the season.  Lauren Bohaboy played the ball into the Clemson goal box where Thomas picked it up and sent it to the back of the net.

The Tigers’ two best scoring chances came midway through the second half.  In the 62nd minute, freshman forward Tori Andreski was fouled just outside the box on a play that resulted in a yellow card for the Irish defender.  Senior midfielder Vanessa Laxgang handled the free kick and rifled a shot toward the right side of the net, which was blocked by Notre Dame.  A few minutes later, freshman defender Claire Wagner handled a corner kick for Clemson, which found its way to senior defender/forward Tabitha Padgett on the left side.  Padgett’s 12-yard shot was off the mark, going just over the top of the goal.

For the game, Notre Dame outshot Clemson 13-12 with a 7-4 shots-on-goal advantage.  Notre Dame also had the advantage in corner kicks 5-3.  Sheridan finished the game with four saves on the day and senior keeper Morgan Hert added one save for the Tigers.  Seniors Padgett and Laxgang were the only Tigers to record multiple shots with three and two respectfully.

Sunday marked the final game at Historic Riggs Field for seven Clemson seniors.  Brittany Beaumont, Hailey Karg, Erica Kim, Deana Sherry, Hert, Padgett and Laxgang were recognized prior to the game along with their families.

“The seniors have been extremely important to the team this season,” noted Radwanski.  “This is a great group of kids.  I can’t thank them enough for their level of commitment to the program, their willingness to welcome new players, their training habits and the fact that they have always been eager to learn and improve.  This is the group that ignited the turnaround for this program and I can’t thank them enough for their efforts.”

Clemson will conclude the regular season when it travels to Coral Gables to take on Miami on Thursday, October 31. The game between the Tigers and Hurricanes will kick off at 7 PM.