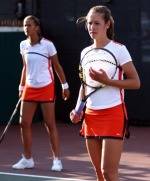 With their final four appearance, Mijacika and van Adrichem became the first Clemson duo in program history to advance past the round of eight. They concluded their season with an 18-5 record and earned All-America honors after reaching the quarterfinals of the NCAA Championships.

The Tribe team posted the first point of the afternoon, holding serve on the Henry Field Courts at the Dan Magill Tennis Complex in Athens, GA. After the Tigers tied the set a one game apiece, Moulton-Levy and Zoricic won the next two games, breaking van Adrichem’s serve for the only break of the frame. Van Adrichem held her next serve to narrow the gap to 5-3, but William & Mary held as well to win the first set, 6-3.

Mijacika and van Adrichem were then down a break at 5-4 in the second frame when they rallied to tie the set a five all. Moulton-Levy and Zoricic led 40-0 before the Tiger duo won five straight points to record their only break of the afternoon. The Tribe team, however, then justified its #1-seed, responding with its third break point of the day to take the 6-5 lead. They then withstood another Clemson threat, prevailing for the 7-5 set victory and advancing to Monday’s championship match.