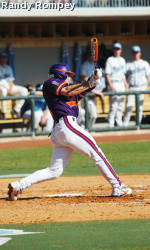 Clemson vs. USC Upstate Clemson (12-4), ranked as high as #18 in the nation, will play host to USC Upstate (6-10) on Wednesday night at Doug Kingsmore Stadium. First pitch is scheduled for 6:30 PM. The game will be broadcast live on the radio by WCCP (104.9 FM) out of Clemson and can be heard live on the internet at WCCPFM.com. Live stats will also be available at ClemsonTigers.com.

The Series Tonight’s game will mark the first-ever game between Clemson and USC Upstate. However, Jack Leggett was 6-2 against the Spartans as head coach at Western Carolina.

The Starting Pitchers USC Upstate will start freshman righthander Austin Moyer (1-3, 11.20 ERA) on the mound. The Greensboro, NC native has made five starts for a total of 13.2 innings pitched. He has given up 22 hits (.367 opponents’ batting average) and 10 walks with six strikeouts.

Clemson will counter with junior righthander Justin Sarratt (2-0, 3.48 ERA) on Wednesday. The Gaffney, SC native has made three relief appearances and one start for a total of 10.1 innings pitched. He has yielded nine hits (.231 opponents’ batting average) and one walk with four strikeouts.

The Spartans USC Upstate, led by 12th-year Head Coach Matt Fincher, enters Wednesday’s game at #18 Clemson with a 6-10 overall record and 1-5 Atlantic Sun mark after downing Charlotte 4-3 on the road on Tuesday night. The Spartans are also 4-5 on the road this season.

USC Upstate is averaging 5.4 runs per game and hitting .274 with a .363 slugging percentage and .352 on-base percentage this season. The team has also totaled 26 doubles, three triples, six homers, and three stolen bases in three attempts. Jimmy Tanner is hitting .443 with five doubles, two homers, and 17 RBIs. Eric Guillen is also batting .328 with eight doubles and 12 RBIs.

The pitching staff has a 6.21 ERA and .297 opponents’ batting average along with 105 strikeouts against 86 walks in 137.2 innings pitched. Junior righthander Barrett Stover has all three of the team’s saves. USC Upstate is fielding at a .957 clip as well.

The Tigers Clemson, ranked as high as #18 in the nation, enters Wednesday’s game against USC Upstate with a 12-4 overall record and 4-2 ACC mark after blanking Presbyterian 8-0 on Tuesday night. The Tigers are also on a six-game winning streak and sport a 10-2 home record.

The pitching staff has a 2.41 ERA and .209 opponents’ batting average. The staff has allowed 40 walks against 143 strikeouts, good for a 3.6-to-1 strikeout-to-walk ratio. Casey Harman has 18 strikeouts against only two walks in 17.1 innings pitched. The team is fielding at a .968 clip as well.

Harman has 62 strikeouts against only 12 walks in 61.1 innings pitched in his two-year career. His 5.2-to-1 strikeout-to-walk ratio would be the best mark in Clemson history if he had enough innings to qualify (100.0 innings pitched is the minimum to qualify).

Harman started the season as a long reliever, but he made his first start of the season against Wake Forest in the second game of a doubleheader on March 13. He allowed just one run in 6.1 innings pitched to earn the win. In 2009, he has a 2-1 record, 2.08 ERA, and .224 opponents’ batting average in 17.1 innings pitched over six appearances (one start).

The Tigers scored three runs in the first inning and never looked back. Ben Paulsen went 3-for-5 with a homer, double, and two runs, while John Nester and Richard Mounce added two RBIs apiece. Mounce drove in his two runs on a pinch-hit single in the eighth inning.