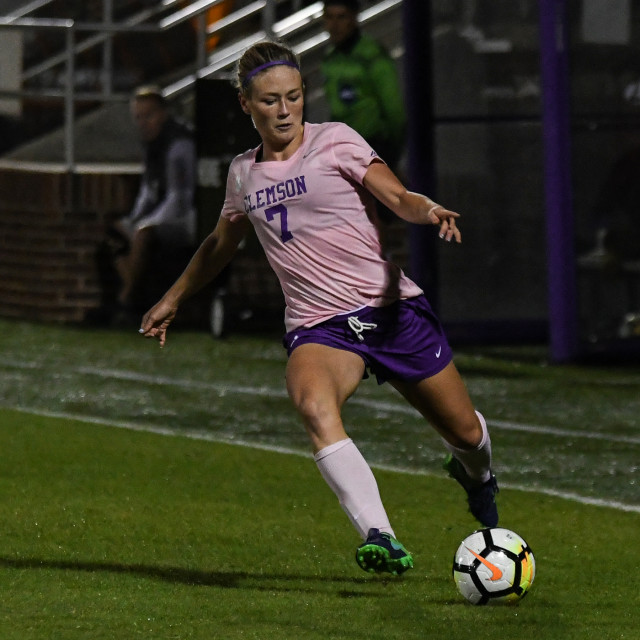 Tigers End Regular Season With 2-2 Draw Against No. 23 Florida State

CLEMSON, S.C. – The Clemson women’s soccer team forced a 2-2 double-overtime draw against No. 23 Florida State on Thursday night at Historic Riggs Field. With the draw, Clemson moved to 9-5-3 overall and 3-4-3 in conference play, while Florida State is now 11-5-1 and 5-4-1.

“It was a very good game with two good teams,” said Head Coach Eddie Radwanksi. “We have a lot of respect for Florida State, as they have set the standard in our conference for the past decade. I was really proud of our team; we fell behind 1-0, and we tied it up; we fell behind 2-1, and we tied it up. Our kids really brought a lot of fight tonight. We were smart, and we had moments of quality. We were hoping for a few more moments, but with two good teams battling each other, those things can happen. We thought in the second overtime, the way the results were going, we were in the ACC Tournament and our draw would have gotten us in. Under three minutes to go the other result turned, someone scored in overtime and at that point it was late.”

In the first half, the Tigers were held to three shots, with the best opportunity coming in the 40th minute when senior Jeni Erickson posted the first shot on goal off a Clemson corner kick set up by a long Sam Staabthrow in. The Clemson defense blocked four of the seven shots the Noles took in the first half, and the teams went into halftime scoreless.

In the second half, Clemson came out strong, posting two shots in the first five minutes. In the 51st minute, Florida State’s Kaycie Tillman gave the Noles a 1-0 lead, scoring from eight yards out. In the 58th minute, Shannon Horgan was taken down in the box, setting up a penalty kick. The shot was saved and deflected by the Florida State keeper, but Jenna Polonsky followed up the deflection and buried the equalizer away in the top right corner to tie the match at 1-1, marking her seventh goal of the season.

In the 71st minute, Florida State regained the lead as Deyna Castellanos found the back of the net. Two minutes later, Staab took a corner kick for the Tigers, sending the ball into the box. Dani Antieau scored her first goal of the season as she buried the loose ball away from 10 yards out, tying the match at 2-2.

In the two 10-minute overtime periods, sophomore keeper Sandy MacIver came up with two big saves as the Clemson defense held Florida State to only two shots on goal, while the Tigers did not attempt a shot in overtime.

For the match, Florida State outshot Clemson 16-11, with the Seminoles and Tigers both putting four shots on target. MacIver recorded four saves in the 110 minutes of play.

With the tie against the No. 23 Seminoles, the Tigers concluded the regular season with 12 points in conference play. Boston College defeated Pittsburgh in double overtime on Thursday night to move ahead of Clemson in the ACC standings with 13 points. As a result, the Tigers finished just outside the top eight in the standings and one point shy of qualifying for the ACC Tournament. The Tigers, listed at No. 36 in the RPI ratings released on Oct. 22, now await word on a bid to the 2017 NCAA Tournament. The NCAA Selection Show is scheduled for Monday, Nov. 6.