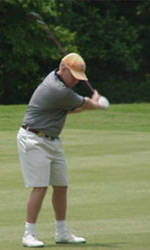 Tigers Eliminated From US Amateur

Clemson, SC – D.J. Trahan and John Engler were both eliminated in the round of 32 from the United States Amateur on Thursday morning. Both had won first-round matches in the match play portion of the event on Wednesday.

Trahan lost to defending US Amateur Champion Jeff Quinney, 1-up. The Clemson junior had battled back from three down with three to play by winning the 16th and 17th holes. But the two players squared the 18th hole, allowing the former Arizona State player to move on in the event.

Trahan will now return to Clemson for his junior year. His first tournament for the Tigers will be at The Ridges in Johnson City, TN September 8-9.

Engler, who graduated from Clemson this past May, also lost 1-up. He was defeated by Georgia Tech player Kris Mikkelsen. Like Trahan, Engler made a comeback, but it fell short. Engler was one down on the 17th, but birdied the hole to tie the match. But, Mikkelsen won the 18th hole to capture the match and move on to face Quinney in the round of 16, a match that will take place Thursday afternoon.