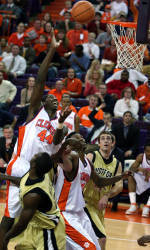 The Terriers (3-5) had a chance to win at the buzzer, but Tyler Berg’s 3-pointer at the buzzer hit the back of the rim.

The Tigers (7-0) appeared to come out flat after Saturday’s 19 point win over South Carolina. They could never put Wofford away, even though the Terriers played most of the second half without leading scorer Eric Marshall who was out with a knee injury.

Wofford’s final lead of the game came with just under five minutes to go when Adam Sheehan’s 3-pointer put the Terriers ahead 56-54. The Terriers would only hit four free throws for the rest of the game.

The Tigers would take the lead for good at 60-58 when Vernon Hamilton stole a pass and broke for layup with 3:20 remaining.

Clemson’s Shawan Robinson led all scorers with 17 points, while Hamilton added 12 for the Tigers.

Both teams were sloppy in the first half as each committed 13 turnovers. The opening half also saw eight lead changes and five ties, finishing with Clemson leading 29-26.