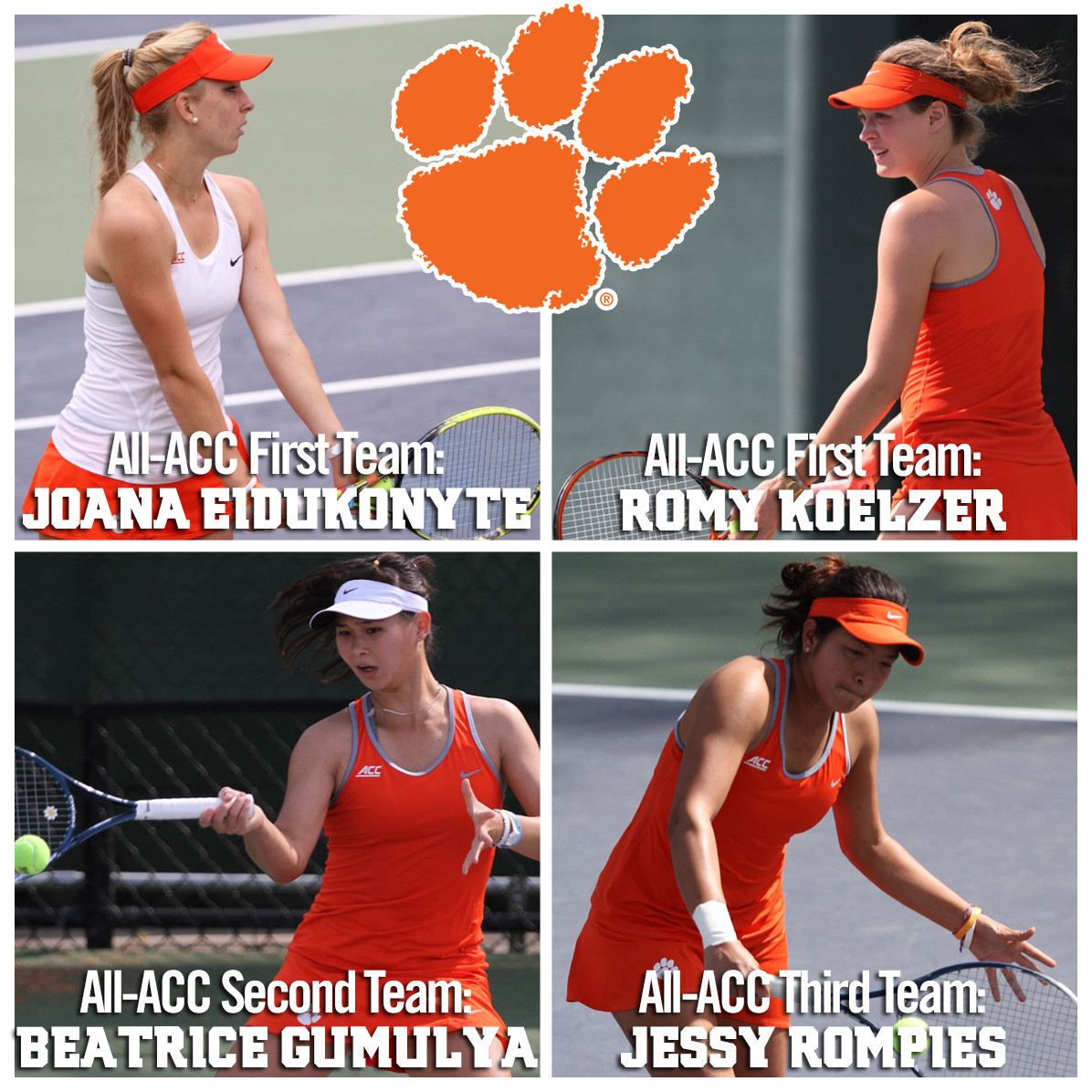 CLEMSON, S.C. – Four members of the Clemson women’s tennis team were named to the 2015 All-Atlantic Coast Conference team as announced by the league office on Wednesday morning. The Tigers’ four all-conference selections led all ACC schools in that category. Senior Romy Koelzer and junior Joana Eidukonyte were named to the All-ACC First Team, while seniors Beatrice Gumulya and Jessy Rompies were voted to the Second and Third Team, respectively.

The all-conference honor is the second career honor for Koelzer, a native of Betzdorf, Germany, who was named to the All-ACC Third Team in 2014. Koelzer has a 10-3 record in ACC dual matches in 2015, which includes a win over the number-one-ranked player in the nation, Julia Elbaba of Virginia, also an All-ACC First Team selection, on March 20. She has a 19-9 overall record in 2014-15 and a total of seven wins over ranked players. Koelzer also has a highly decorated career academically, recently earning the ACC’s Weaver-James-Corrigan Postgraduate Scholarship as well as being named to Clemson’s Academic Hall of Fame.

Eidukonyte is making her first appearance on the All-ACC team after posting a 12-2 record in conference singles play. For her two-year Clemson career, she is 18-3 in ACC singles matches. The native of Vilnius, Lithuania leads the Tigers with an impressive 31-6 overall singles record in 2014-15. She also has nine wins over ranked opponents, including five against top-25 ranked players. Eidukonyte has won 10 of her last 11 singles matches.

Gumulya now has three All-Atlantic Coast Conference honors to her credit, having been selected to the team three straight years. Gumulya, from Jakarta, Indonesia, is 11-3 in ACC singles play in 2015, and 40-9 in her four seasons with the Tigers. She is also 10-2 in ACC doubles play this year, which includes an 8-2 record with Rompies at the No. 1 slot. Gumulya and Rompies are 26-4 overall in doubles play, are currently ranked fourth in the nation, and won the ITA All-American Doubles Championship in the fall of 2014.

Rompies, also from Jakarta, Indonesia, received her first career All-ACC selection this year after recording an 8-4 record in singles play and a 9-2 record in doubles play in the league. In two seasons for the Tigers, Rompies has a stellar 19-3 record in ACC doubles contests. She also has three wins over ranked singles players and seven, with Gumulya, over ranked doubles opponents, in 2014-15.

The Tigers open play in the second round of the 2015 ACC Championships in Cary, N.C. on Thursday, April 23 at 3 p.m. Clemson, the fifth-seed in the tournament, faces the winner of the first-round contest between No. 12-seed Syracuse and No. 13-seed Louisville.