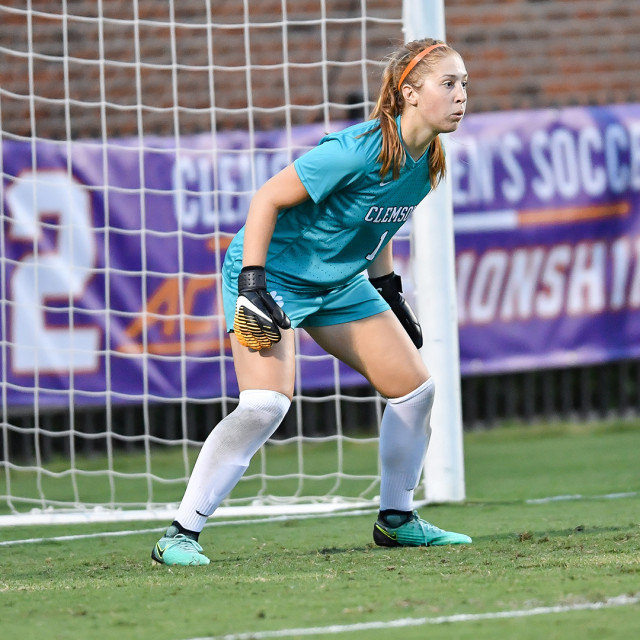 CHARLOTTESVILLE, Va. – The Clemson women’s soccer forced a double-overtime scoreless draw at No. 14 Virginia on Saturday night at Klöckner Stadium. With the tie, Clemson moved to 8-4-2 overall and 2-3-2 in conference play, while Virginia is now 8-3-4 and 3-1-3.

“Two very good teams went to battle tonight,” said Head Coach Eddie Radwanski. “It was a great atmosphere to play in, as it’s a difficult place to play due to Virginia being very strong at home. I was very pleased with our performance as we made things difficult for them. Going into overtime we kept our performance up, our kids didn’t give up and kept battling. All in all, a good performance and the girls are doing what we ask of them.”

In the first half, the Tigers took two shots, the first coming in the ninth minute from Dani Antieau that she headed just over the cross bar, and the second coming in the 31st minute off the foot of Shannon Horgan that went just wide of the cage. The Clemson defense, led by Sam Staab, held the Cavaliers to only two shots on goal as both teams went into halftime scoreless.

In the second half, Clemson had a couple of scoring opportunities, the best coming in the 65th minute as the Tigers started a charge and Jeni Erickson sent a cross to Kimber Haley, who took aim and sent the ball wide of the net. In the two 10-minute overtime periods, the Clemson defense held Virginia to only two scoring opportunities, while the Tigers did not attempt a shot in overtime.

For the match, Virginia outshot Clemson 15-4, with the Cavaliers putting five shots on target. MacIver recorded five saves in the 110 minutes of play, good for her sixth shutout of the season.

The Tigers return to action on Thursday, Oct. 19 as they travel to Raleigh, N.C. to face the NC State Wolfpack at 7 p.m. Clemson returns to Historic Riggs Field on Sunday, Oct. 22 as they host Wake Forest at 1 p.m. for Senior Day.