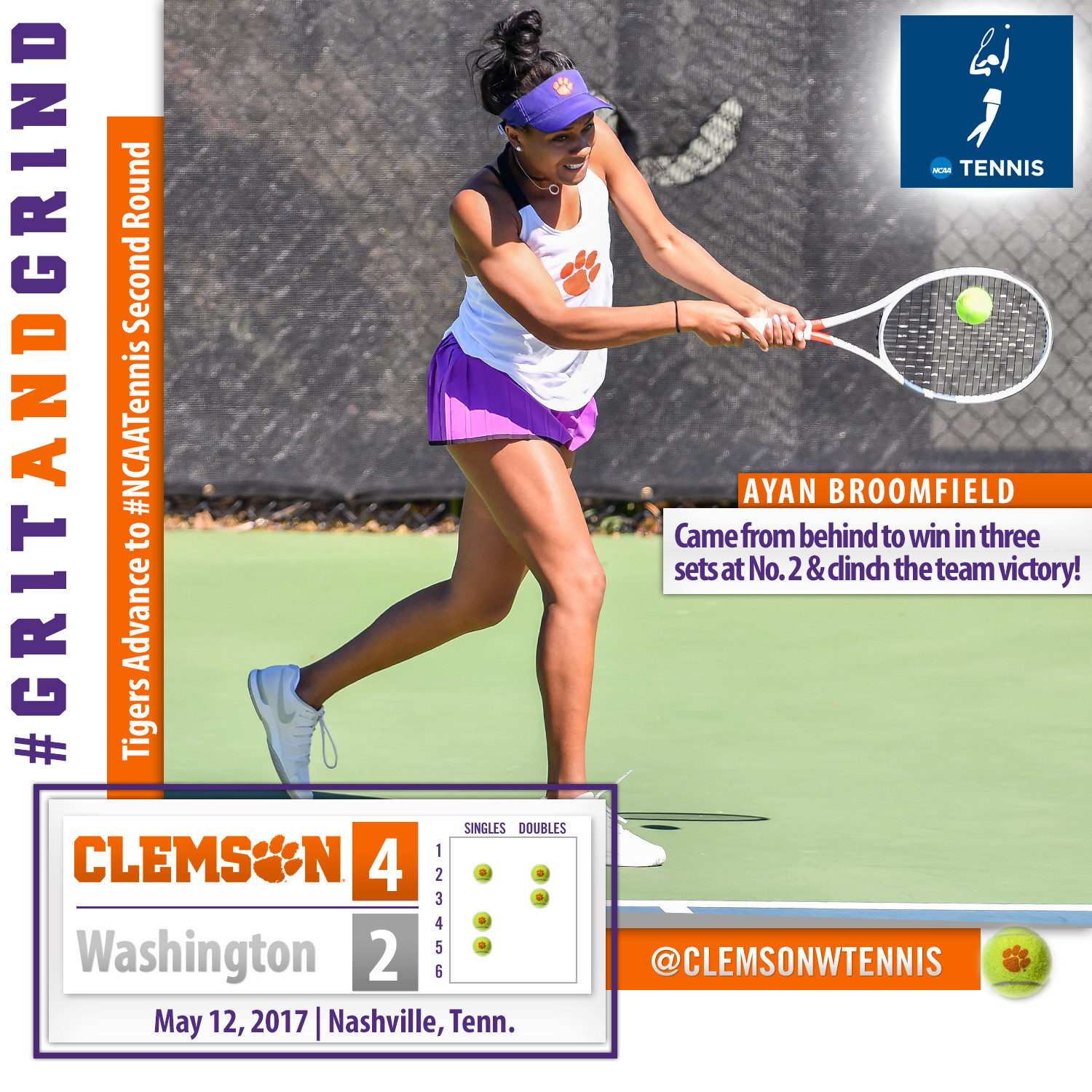 Tigers Earn Gutsy Victory over Washington in NCAA First Round

NASHVILLE, Tenn. – The third-seeded and 38th-ranked Clemson women’s tennis team gutted out a 4-2 victory over second-seeded and 31st-ranked Washington in the first round of the NCAA Championships in Nashville, Tenn. on Friday afternoon. With the win, the Tigers improve to 14-12 overall and advance to the NCAA Second Round on Saturday.

Freshmen Constanza Gorches and Sydney Riley set the tone for the match, coming out quickly and picking up a 6-2 win at No. 2 doubles. Sophomore Fernanda Navarro and junior Daniela Ruiz clinched the doubles point and gave the Tigers a 1-0 lead in the match with a 6-4 win at No. 3 doubles. With the win, Navarro and Ruiz improved to 16-1 on the season and won their 12th match in a row.

Singles play began outdoors at the Commodores’ Currey Tennis Center, but light showers forced two short suspensions and restarts before officials moved the match indoors. Washington won the first two singles matches, at No. 1 and No. 3, to take a 2-1 lead, before Riley tied the team score at 2-2, winning 6-4, 6-3 at No. 4 singles. After falling in the first set 3-6 at No. 5 singles, Gorches came back to take the second and third sets, 6-0, 6-4, over her Huskies’ opponent. Sophomore Ayan Broomfield also came from behind at No. 2 singles, clinching the match in three sets, 4-6, 6-4, 6-4, to send the Tigers on to the second round of the national tournament.

The NCAA tournament win was the 29th in Head Coach Nancy Harris’ 20-year career at the helm of the Clemson program, as the Tigers now have a 29-17 record in NCAA matches under Harris. The Tigers have made the NCAA Championships 18 times in Harris’ tenure, and this is the 15th time the team has reached at least the second round of the national tournament. Harris remains the only head coach in Clemson history to take a women’s team to the NCAA Final Four, as she led the Tigers to the national semifinals in both 2004 and 2005. Current Clemson Assistant Coach Maria Brito was on both of those teams.

Clemson faces the winner of this evening’s match between third-ranked Vanderbilt and SIU Edwardsville in the NCAA Second Round on Saturday. The match is set for 1 p.m. CT (2 p.m. ET) at the Currey Tennis Center.