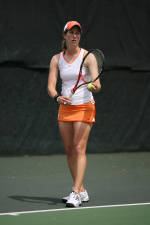 CLEMSON, SC – The Tiger women’s tennis defeated in-state rival South Carolina on Sunday afternoon by a 5-2 margin at the Clemson Indoor Tennis Center. The win was the third straight for the Tigers over the Gamecocks and tied the overall series score at 22 wins apiece.

The Tigers captured the doubles point for the ninth time this season as Clemson teams captured wins at flights two and three. Laurianne Henry and Estefania Balda and Alexandra Luc won their 12th match of the season. The Tiger duo downed the South Carolina team of Suzanna Mansour and Dijana Stojic at flight three (8-2).

Bek then scored the Tigers’ second point of the afternoon with a straight set win over Schofield at the top flight (6-2, 6-1). Bek moved up to the number one singles position with #2-ranked Ani Mijacika out due to an injury. The Gamecocks picked up their first point as Stojic defeated Hadziselimovic at flight three, 6-3, 6-2.

Balda won a three-set battle at the second position over Zubori. Balda edged the South Carolina player in a tie break in the first set before Zubori won the second, 6-2. Balda then claimed the victory with a 6-1 win in the third. Luc then clinched the win for Clemson with a straight-set win over Ashley Miller at flight five (6-2, 6-1) for her fourth straight win.

Wong then put the Tigers up by a 5-1 margin as she defeated Vuckovic at the fourth position, 6-2, 6-1. South Carolina scored its second and final point at flight six as Henry fell to Jocic. The two played a pro-set since the match was already decided.