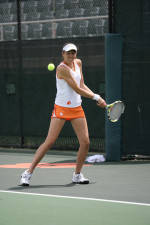 CLEMSON, SC – Sophomore Laurianne Henry sent her team to the NCAA Tournament round of 16 for the second straight season as she clinched the Tigers’ 4-0 win over North Carolina in second-round action on Saturday afternoon at the Hoke Sloan Tennis Center. Clemson’s women’s tennis team prevailed in doubles action and then won the opening set on all six singles courts en route to posting victories at flights two, three and six.

The Tigers improved to 19-7 on the year and have now reached the final 16 for the third consecutive year. Clemson advances to face fifth-seeded Notre Dame on Friday, May 15 in College Station, TX on the campus of Texas A&M University.

“‘I’m so happy for our team to get this win,” said Clemson Head Coach Nancy Harris. “Our goal was to never let them get going. To get the doubles point was phenomenal because, in my opinion, North Carolina has the best doubles in the country. Every player on the team stepped up today for us.”

The Tigers outlasted North Carolina to win an extremely hard-fought doubles point and take a 1-0 lead in the match. Federica van Adrichem, playing in just her second match since early November, partnered with Alexandra Luc to post the first victory of the day for Clemson. The Tiger duo claimed the first five games against Meg Fanjoy and Laura Reichert and held on for the 8-4 victory at flight three.

The match at the second position was one of runs that saw the teams of Ina Hadziselimovic from Clemson and Austin Smith and Katrina Tsang from North Carolina trade wins their first six games. The Tiger tandem then won the next four games for a 7-3 lead in the match. However, the Tar Heel duo battled for a break to narrow the margin to 7-5 before Clemson closed out the match on a winner by Hadziselimovic.

The flight one match-up was another tough battle but it did not render a decision due to the stop-match format of tournament play. The Tigers’ ninth-ranked team of Ani Mijacika and Keri Wong faced off against North Carolina’s number-four duo of Sophie Grabinski and Sanaz Marand. The teams were in a tie-break situation when played was called.

Bek was then first off the court in singles play, a day after clinching a Tiger victory, as she defeated Tsang in straight sets at flight two. Tsang held her first serve of the opening set before Bek rattled off eight straight games including three in the second set.

Hadziselimovic put the Clemson on top by a 3-0 margin with her win over Austin Smith at the third position. The Tiger junior served for match point and Smith’s return went long for the 6-3, 6-2 win.

Henry then found herself in a familiar position as she led in her match at flight six.

“I didn’t really know until the last two games when I finally looked at the score,” Henry said. “I was in the same position last year and the pressure felt exactly the same, so I was prepared.”

The sophomore from Anderson, SC, who also clinched Clemson’s 4-1 win over Michigan last season, edged North Carolina’s Laura Reichert for the 6-4 win in the first set and then defeated the Tar Heel player by a 6-3 margin in the second.

The Tar Heels concluded their season with a 19-11 record.