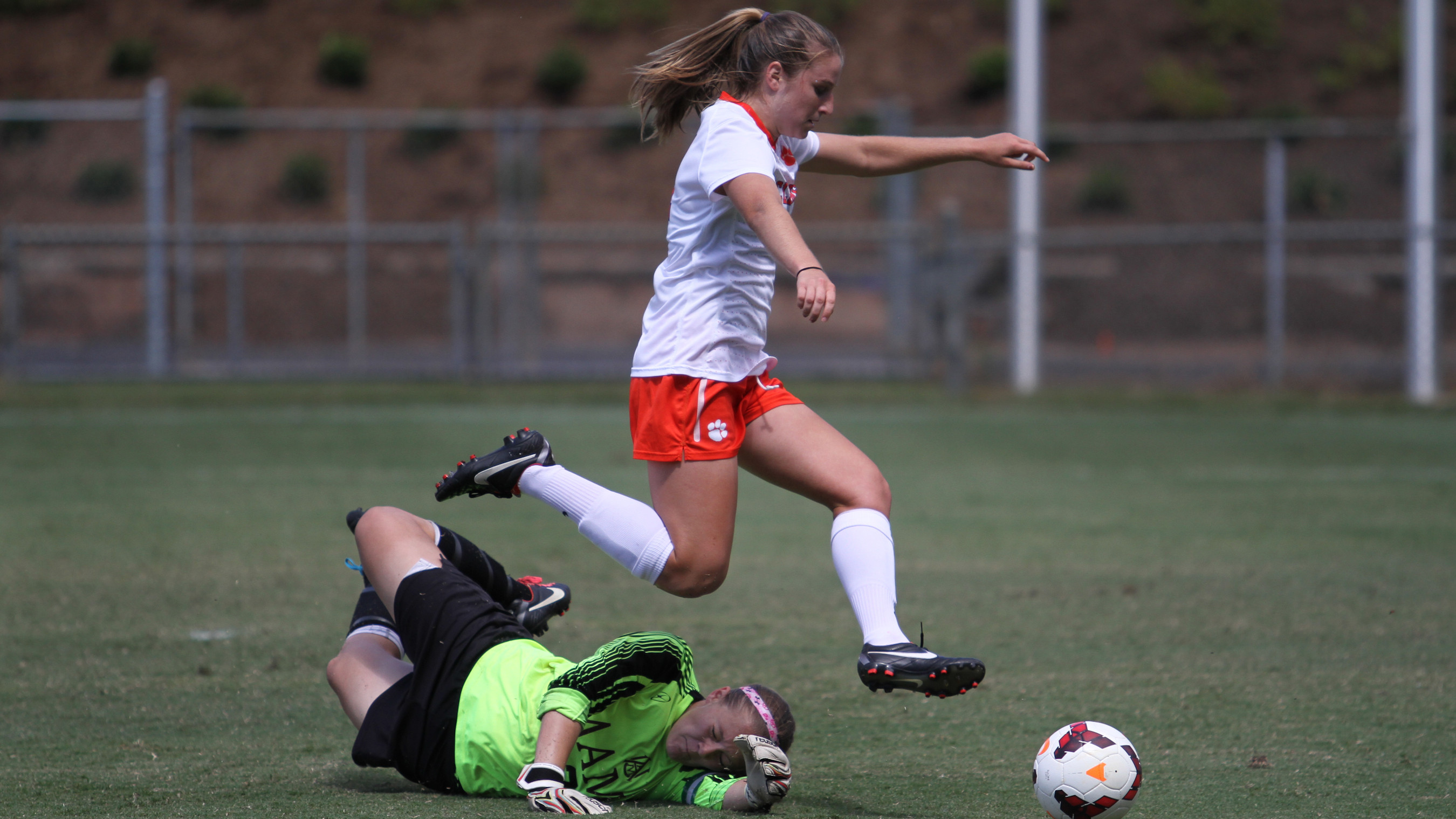 CLEMSON, SC – Behind an offensive explosion that saw 10 different Tigers record at least one goal, the Clemson women’s soccer team defeated Alabama A&M 14-0 on Sunday afternoon at Historic Riggs Field.  The Tigers improved to 5-2-2 (2-1 ACC) with the win, while the Bulldogs fell to 0-10 (0-0 SWAC).

Numerous Clemson records were set in the victory over the Bulldogs.  The 14 goals, 20 assists and 48 points broke the previous highs of 10 goals, 15 assists and 35 points which were set September 1, 1998 when the Tigers defeated Auburn on the road.  Three Clemson players scored multiple goals for the first time since 2004, and seven Tigers recorded multiple assists, which is a new all-time high.

“Before the game, we talked about coming out with a good effort and holding to our standard,” said head coach Eddie Radwanski.  “One of the good things about today was that we were able to play everyone, and each player who stepped on the field played to that same standard.

“Every person on this team makes a contribution every day, whether it is on or off the field of play.  Today, everyone was able to make a contribution on the field while keeping the standard at a high level, which I was pleased to see.  Now we turn our focus to the two tough conference games coming up this week – our first ACC road game at Syracuse, and then back home to face a top-five Florida State team.”

Senior forward Deana Sherry recorded her first career hat trick in Sunday’s win.  All three of Sherry’s goals came in the second half, which tied a Clemson record for most goals in a half by a single player, most recently achieved by Julie Bolt in 2008.  Senior midfielder Vanessa Laxgang and sophomore midfielder Kylie Tawney each recorded two goals on the day for the Tigers.

Three Tiger keepers, freshman Kailen Sheridan, senior Morgan Hert and freshman Anna Davis all combined on the shutout, but it was freshman midfielder Katie Sprouse that made the lone save of the day for Clemson.

Laxgang opened the scoring at the 1:07 mark when she received a pass from freshman defender Gabby Byorth, dribbled in and shot the ball into the lower right corner of the net past the Bulldog keeper.  Laxgang tacked on another goal three minutes and 39 seconds later when she took a pass off freshman midfielder Emily Byorth‘s corner kick and placed it in the top left corner.  The goals were the third and fourth of the season for Laxgang, who also tallied two assists in 24 minutes of action.

Tawney scored the Tigers’ third and fifth goals of the day, her first two goals of the 2013 season.  The first, which came in the sixth minute, was off a long pass from Laxgang, and Tawney was able to beat the keeper in the lower left corner.   Tawney’s second goal was scored at the 18:25 mark, with assists by Gabby Byorth and junior midfielder Katelyn Reeve.

Paige Reckert, Claire Wagner, Allie Kington, Hailey Karg, Jenna Polonsky, Jenna Weston and Katie Sprouse all added goals for the Tigers in the victory.  For Wagner, Kington, Karg, Weston and Sprouse, the goals were their first of the season, and for Wagner, Weston and Sprouse, were also the first of their collegiate careers.  Savannah Coiner, Abby Jones, Brittany Beaumont, Haley Hunt and Tori Andreski also recorded assists in the game for the Tigers.

With Sunday’s win against the Bulldogs, the Tigers concluded a six-game homestand with a 4-2 record.  Clemson will return to action on Thursday, September 26 when they will travel to Syracuse to face the ACC newcomer for the first time in program history.  The Tigers will return to the friendly confines of Historic Riggs Field on Sunday, September 29 to play host to #3 Florida State at 1 PM.  The match between the Tigers and Seminoles will be broadcast live on ESPN3 on ClemsonTigers.com.