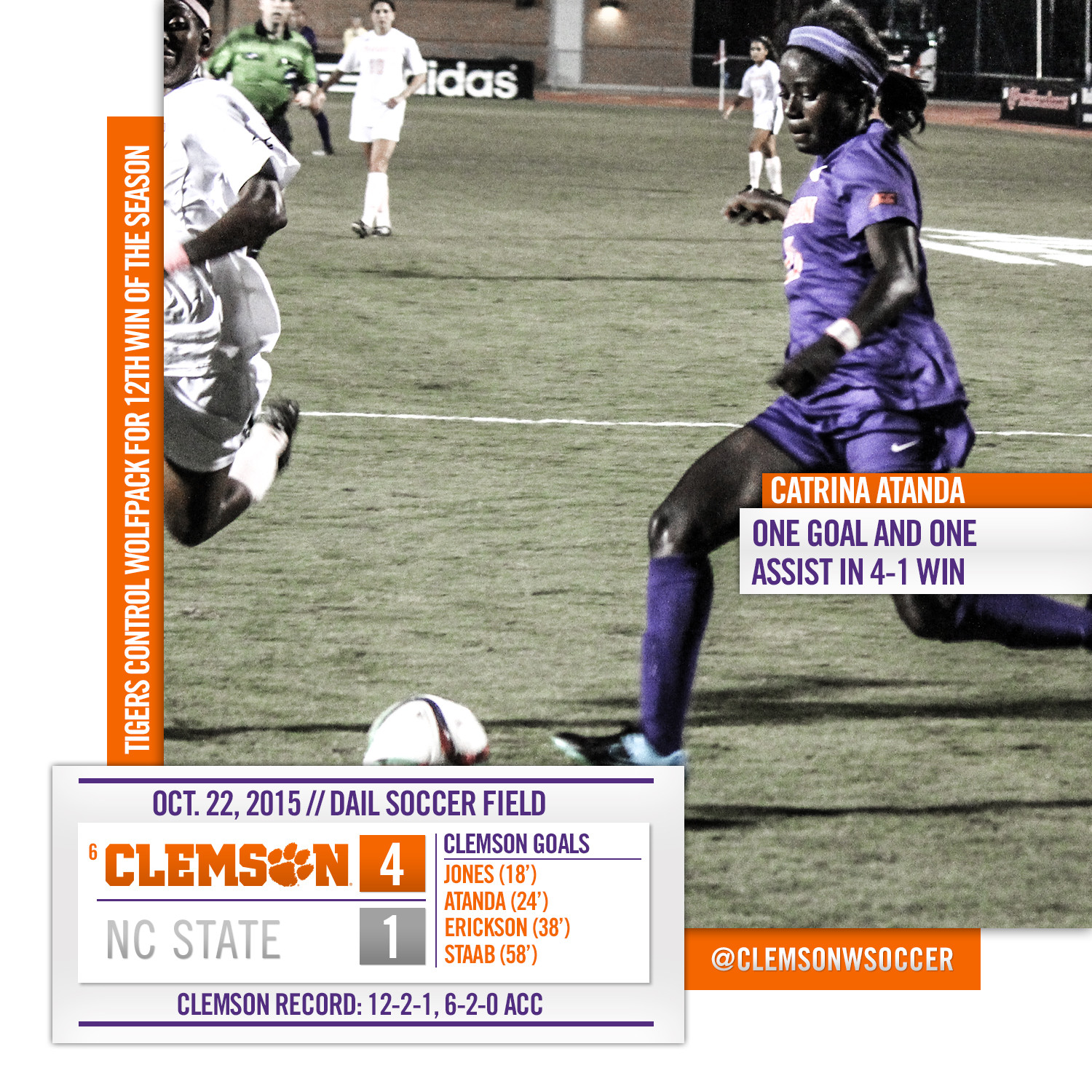 Abby Jones got the scoring frenzy going for the Tigers in the 18th minute after cleaning up a rebound from Catrina Atanda’s initial strike. Atanda’s shot bounced off the goalkeeper and Jones finished with the ball on the deck, for her second goal of the season, to give Clemson an early 1-0 lead.

Head coach Eddie Radwanski was particularly pleased with Jones’ leadership in the contest.

“She had the right mindset and got our team off to a fabulous start, and we just rode the momentum from there. Abby’s play and leadership really set the tone early with the first goal.”

In the 24th minute, Atanda fired a shot from 22 yards out that was too hot for the keeper to handle despite getting a hand on it. The ball deflected off the keeper and crossed the goal line to increase the Tigers lead to 2-0. Atanda recorded her fifth goal and third assist on the season in the win.

Radwanski also liked the way Atanda played in the contest and has played so far this season.

“Catrina has been consistent for us all season so it was good to see her get a goal and assist tonight. I think she has deserved a little better recently because she has been playing really well and has been dangerous as of late.”

Sophomore forward Jeni Erickson added to the Clemson lead with her first goal of the season in the 38th minute to finish the dominating half for the Tigers. Samantha Staab’s corner sailed into the box and Erickson was able to head it past the keeper for Staab’s team-leading sixth assist of the season.

Staab got in on the scoring in the 58th minute on a header of her own. A corner from Claire Wagner found Katie Sprouse who crossed the ball back into the box for the double assist. The assist was Wagner’s fifth of the season increasing her points total to 11, and was Sprouse’s second assist in 2015.

NC State found the back of the net in the 84th minute from 22 yards out to reduce the deficit to three, but it was too little too late as the Tigers won the contest 4-1.

Clemson will return to action on Sunday, Oct. 25 in a crucial ACC matchup against North Carolina. The match is set to start at 1 p.m. at Fetzer Field in Chapel Hill.

“Its always a big game when you play North Carolina,” noted Radwanski. “We have a tremendous amount of respect for them and their program. We just need to collect ourselves over the next few days and do what we have been doing all season. This is who we are and how we want to play, so we will see what we are able to accomplish come Sunday.”