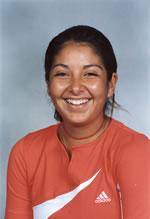 Brito and Coin, ranked 29th in the ITA’s preseason doubles poll, received a bye in the first round of the tournament, defeated Winthrop’s Barreto and Takahashi in the second round by a score of 8-4 and won an 8-5 decision over North Carolina’s Bairos and Long to advance to the quarterfinals. The duo won their quarterfinal match over Foster and Kalsarieva of Kentucky (8-0), and defeated 30th-ranked Kruse and Venter of Middle Tennessee in the semifinal (8-3). In the final match, Brito and Coin battled their way to a 9-7 victory over Wake Forest’s Karin Coetzee and Aimee Smith to take the championship title.

In other doubles action, the Tigers’ team of Richele LeSaldo and Karen Rombouts reached the final eight before dropping an 8-5 decision to Coetzee and Smith. The pair defeated Blakely and Koon of South Carolina (8-6), Johnson and Zika of Duke (8-4) and Maurer and Schwenk of Kentucky (8-6) to reach the tournament’s final eight.

In singles play, Brito reached the quarterfinals of the tournament before falling to Kentucky’s Aibika Kalsarieva in three sets (3-6, 7-6(9), 6-2). She was victorious over Ashlee Davis of Wake Forest in the first round (7-6, 6-0) and defeated the Demon Deacon’s Aimee Smith in the second round (6-2, 6-3). In the third round of the main singles draw, Brito won a 7-6(5), 6-1, 6-0 decision over Lara Maurer of Kentucky before falling to Kalsarieva in the quarterfinals.

The Tigers’ Daniela Alvarez won her first and second round singles matches before falling in the round of 16 to Wake Forest’s Alex Hirsch (6-3, 6-2). Alvarez won a 7-5, 6-2 decision over Ellen Rogers of Wofford in the first round, and defeated Tennessee’s Majen Immink 6-4, 6-2 in the second round of the main singles draw.

Rombouts was victorious in the first round of the main singles draw, winning a 6-1, 6-1 decision over Marie Matrka of Coastal Carolina. Rombouts fell in the second round to Karin Coetzee of Wake Forest, 6-4, 6-2. The Tigers’ Ioana Paun dropped her first match in the main singles draw to Medina Bajrambasic of Coastal Carolina in three sets (3-6, 6-3, 6-4). LeSaldo competed in the qualifying singles draw for the Tigers, defeating Winthrop’s Renata Barreto by a score of 6-2, 6-4 before falling to Kentucky’s Christine Simpson, 6-3, 6-4.

Clemson will return to action on Nov. 6-9 as they travel to Ann Arbor, MI to compete in the ITA National Indoor tournament.