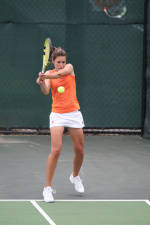 COLLEGE STATION, TX – Clemson women’s tennis players Ani Mijacika both needed three sets after dropping their openers but pulled off victories in the first round of the NCAA Singles Championships on Wednesday afternoon. They advance to Thursday’s second round of play at the George P. Mitchell Tennis Center on the campus of Texas A&M University. The doubles tournament is scheduled to begin on Thursday as well with a pair of Tiger teams set for competition.

Matches are slated to start at 11:00 am Eastern Time on Thursday. The complete schedule will be set after the conclusion of Wednesday’s action and will be available, along with live statistics and video broadcasts, on the Texas A&M Athletics website.

In her singles match-up, Bek held on to defeat 27th-ranked Anastasia Petukhova of Fresno State (3-6, 6-4, 6-0). She fell in the first set by a 6-3 margin before winning the first three games of the second. Petukhovav came within one at 4-3, but Bek broke the Bulldog player’s serve for the 6-4 victory. The Clemson rookie did not drop a game in the deciding set to improve to 33-9 for the year. She will look to avenge her loss in the round of 16 in the team championships as Bek and Notre Dame’s Kristy Frilling will match up for the second time in the last seven days.

Mijacika, the tournament’s #4 seed, eked out the win over 59th-ranked Marta Lesniak to advance to the round of 32 for the second straight season. The Tiger junior relinquished a 4-1 lead in the first set to fall in the tiebreak, but rallied to erase a 4-1 deficit in the second, winning the final five games of the set to extend the match. The two players then played a close final set with SMU’s Lesniak holding serve for a 3-2 advantage. Mijacika rallied to win the next three games for the edge but Lesniak rallied right back to tie the match at five games apiece. Mijacika broke Lesniak and then clinched the match with a winner. She advances to face Laura Vallverdu of Miami. The two conference foes met during the 2008 regular season when Mijacika posted a straight-set victory.

With the two Tiger wins on Wednesday, it marks the second straight year, but just the second time since 1986, that Clemson has had two players advance in the NCAA Singles Championships. The 1986 season was also the last time that two Tiger players came back to win their matches after dropping the first set on the same day at the NCAA Tournament.

Mijacika will team with Ina Hadziselimovic will partner in doubles action.