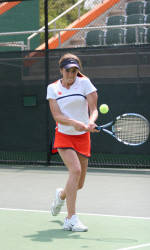 CLEMSON, SC – The Clemson women’s tennis team advanced to its fifth straight regional final with a 4-0 victory over Coastal Carolina in the first round of the NCAA Championships at the Hoke Sloan Tennis on Friday morning. The Tigers will take on the winner of the Virginia Commonwealth-Virginia match at 11:00 am on Saturday morning. With the win, #6 Clemson improved to 21-4 on the year, while the Chanticleers ended their season with a 19-6 record.

“I thought we played really well today,” Clemson Head Coach Nancy Harris said. “I was very pleased with the way we responded to the competition. It was a good start to the tournament.”

The Tigers clinched the doubles point in just over 30 minutes to take the 1-0 lead in the match. Clemson’s 55th-ranked team of Estefania Balda and Ina Hadziselimovic swept Maria Camberos and Nicole Lemmerer at flight two, 8-0, as the duo held serve to post the final point. Tigers Carol Salge and Maria Brito followed with their own 8-0 victory, finishing just minutes after Balda and Hadziselimovic. Clemson’s number-three tandem defeated Sarize Coetzee and Sofie Ahlberg to remain undefeated at 9-0 on the year.

In singles action, Hadziselimovic put the Tigers up, 2-0, with an easy victory at the flight six position. She defeated Camberos, 6-0, 6-0, for her 17th victory of the year. Balda then won a 6-0, 6-2 decision over Pazahanick in the number two match-up to score Clemson’s third point of the morning. Salge, a junior from San Roque, Brazil, the clinched the victory for the Tigers with a 6-1, 6-0 win against Coetzee at flight two.