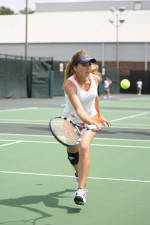 CLEMSON, SC – The Clemson women’s tennis team, ranked 14th in the latest Campbell/ITA Tennis poll, will play host to in-state rival and 30th-ranked South Carolina on Sunday afternoon. The Tigers and Gamecocks are scheduled to begin play at 2:00 pm at the Clemson Indoor Tennis Center.

Ani Mijacika leads the Tiger squad with the #2 national singles ranking and a 20-4 overall record. The junior player boasts an 8-1 record for the spring season, posting five straight wins over players then-ranked in the top 20. Her one loss was suffered during the final match of the ITA National Team Indoor Championships when she forfeited a match due to an injury.

The Tigers will be looking to tie the overall series score at 22 wins apiece and win their third straight over South Carolina. Clemson swept the Gamecocks last season in Columbia, SC during the 2008 season and won a 5-2 decision on its homecourt in 2007. South Carolina’s last win was by a 4-3 margin in 2006, while the Gamecocks’ last win in Clemson, SC was during the 2001 season.