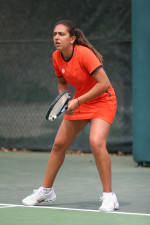 CLEMSON, SC – The 10th-ranked Clemson women’s tennis team will begin its 2008 campaign on Saturday morning as the Tigers will play host to Troy at the Clemson Indoor Tennis Center. Doubles competition is scheduled to begin at 11:00 am with singles action to follow.

Sophomore Ani Mijacika, ranked #4 in the preseason Fila/ITA Tennis singles poll, will look to continue the success from her freshman year and 2007 fall season. The native of Makarska, Croatia is the reigning ACC Freshman-of-the-Year and reached the finals of the fall’s two most prestigious tournaments. She boasts an 11-2 record entering spring competition.

Mijacika is one of six starters returning for Head Coach Nancy Harris, now in her 11th season at the helm of the Tiger program. Senior Carol Salge and junior Federica van Adrichem are expected to retain their starting singles positions as well as provide leadership for the 2008 squad, while Estefania Balda and Ina Hadziselimovic will begin their second seasons at Clemson. Junior Alexandra Luc also returns as a starter in the doubles line-up.

Rookie Laurianne Henry, from nearby Anderson, SC, also figures to challenge for a top singles spot this season after a stellar junior career.

Letterwinners Kathryn Gerber and Samantha Eppelsheimer round out the Tiger roster, while Nuria Zufia joined the Clemson women’s tennis team this January after a two-year career with the Lady Tiger soccer program.

Saturday’s contest will be just the fourth meeting between Clemson and Troy, but the Tigers have won all three previous match-ups. The teams last met during the 2007 season in Charleston, SC where Clemson defeated the Trojans, 5-2. Troy has made just one prior trip to Clemson, which was a first-round contest in the 2004 NCAA regionals. The Tigers won by a 4-0 margin.