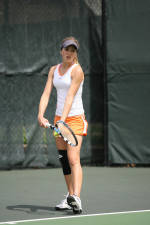 CLEMSON, SC – Ina Hadziselimovic clinched a 5-2 victory for the 132th-ranked Clemson women’s tennis team over ACC foe Virginia Tech on Saturday afternoon at the Hoke Sloan Tennis Center. The junior from Sarajevo, Bosnia improved to 16-11 on the year as the Tigers rebounded from a doubles loss to move to 11-5 overall with a 3-1 record in conference play.

The Hokies dropped to 10-5 on the year and 1-3 against ACC opponents.

Virginia Tech scored the first point of the day with wins at the first and third doubles positions as the Tigers fell in doubles competition for just the third time this season. The Hokie tandem of Yasmin Hamza and Abbey Walker defeated Clemson’s Estefania Balda and Alexandra Luc at flight three by an 8-3 margin t post the first win. Tigers Ani Mijacika and Keri Wong were upset by Jessica Brouwer and Holly Johnson at number one as Virginia Tech clinched the point. The Hokie tandem led, 7-3, before Clemson rallied for two points. The comeback fell short, however, and Brouwer and Johnson recorded the 8-5 victory.

The Tigers picked up a win at flight two as Ina Hadziselimovic held on for the 8-6 win. The Clemson duo led early in the match before Hokies Inga Beermann and Martha Blakely evened the score. The teams were knotted at 6-6, but the Tigers broke Virginia Tech’s serve and then Bek held hers for the win.

Luc put Clemson on the board with a quick victory over Johnson at flight six (6-2, 6-1) while Mijacika finished up at number one shortly after. Mijacika, the nation’s top singles player, defeated Beerman by a 6-1, 6-0 margin to improve to 23-5 on the year. Bek then put the Tigers ahead by a 3-1 margin with her 6-2, 6-4 victory at flight two against Brouwer.

Hadziselimovic then clinched Clemson’s win as she edged Hamza at flight four. The Tiger junior eked out the tie-breaker in the first set and then downed Hamza by a 6-2 margin in the second for her 16th win of the season. Wong then scored the fifth point of the afternoon for Clemson as she held on for a 6-1, 7-6 victory at flight five. The rookie from Jackson, MS easily claimed the first set over Courtney Rauscher, 6-1, before winning the tie-break in the second set to extend her singles winning streak to five straight.

Blakely scored Virginia Tech’s only point in singles play as she defeated Balda at the third position, 7-6, 6-2.