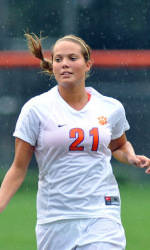 CLEMSON, SC – The Clemson women’s soccer team will play host to ninth-ranked Florida State on Thursday, October 15 at Historic Riggs Field. The game between the Tigers and the Seminoles will begin at 7:00 PM and will be broadcast live on www.clemsontigers.com via TigerCast.

The Tigers have a 3-10 record (0-5 ACC), most recently falling to Miami by a score of 2-0 in Coral Gables on Friday, October 9. Freshman forward Lily Boleyn (one goal, two assists) and sophomore forward Tara Cort (two goals) are tied for second on the Clemson roster in scoring with four points apiece. Junior Paula Pritzen has posted 49 saves in 1,154 minutes in goal on the season.

Florida State is 10-2-1 overall and has a 3-1-1 record in league play. The Seminoles most recently played to a 0-0 double overtime tie versus Duke on Sunday, October 11 in Durham, NC. Sophomore forward Tiffany McCarty leads Florida State in scoring with 10 goals and four assist for 24 points. Sophomore keeper Erin McNulty has recorded 23 saves and given up just nine goals in 1,075 minutes in the net for the Seminoles.

The Seminoles lead the overall series against the Tigers with a 10-7-2 all-time record, however Clemson has a 5-4 advantage in games played at Historic Riggs Field. Last season, then sixth-ranked Florida State defeated the Tigers by a score of 4-0 in Tallahassee, FL.