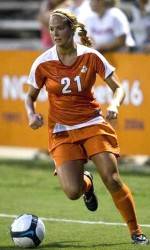 CLEMSON, SC – The Clemson women’s soccer team will play host Georgia on Friday evening at Historic Riggs Field. The Tigers will face the 15th-ranked Bulldogs at 7:00 PM. The game will be broadcast live on www.clemsontigers.com via TigerCast.

The Tigers are 2-4 in 2009, most recently falling to #18 South Carolina and Furman (in overtime) in the Carolina’s Cup held in Clemson last weekend. Freshman forward Callie Cavanaugh has one goal and one assist to rank second on the team in scoring. Cavanaugh was named to the Carolina’s Cup All-Tournament team last weekend. Junior Paula Pritzen has posted 21 saves in six games in goal for the Tigers.

Georgia has a 6-0-1 record so far this season and is currently ranked 15th by the National Soccer Coaches Association of America. Last weekend, the Bulldogs defeated Charlotte 3-2 in Charlotte, NC and won a 3-0 contest over Georgia State in Athens. Georgia is led in scoring by senior forward Carrie Patterson with 13 points (five goals, three assists) and sophomore midfielder Jamie Pollock with 11 points (five goals, one assist.) Senior keeper Michelle Betos has 20 saves and has given up just three goals in seven games for the Bulldogs.

Clemson has a 4-1 record in the all-time series, which dates back to the 1996 season. The last meeting between the two teams was the Bulldogs’ first win in the series, a 2-1 victory in the first round of the NCAA Tournament in Knoxville, TN on November 14, 2003.