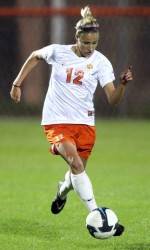 CLEMSON, SC – The Clemson women’s soccer team will play host to 13th-ranked Maryland on Thursday, October 22 at Historic Riggs Field. The game between the Tigers and the Terrapins will begin at 7:00 PM.

The Tigers are 3-12 overall (0-7 ACC), most recently falling to Duke by a score of 2-0 on Sunday, October 18 at Historic Riggs Field. In its three remaining regular season games, Clemson will face three opponents ranked in the top 13 in the nation. After playing host to the 13th-ranked Terrapins, the Tigers will face #8 Boston College in their final home game on Sunday, October 25 before hitting the road to take on defending national champion and currently second-ranked North Carolina in Chapel Hill, NC on October 29.

Freshman forward Paula Pritzen has played over 1,334 minutes in goal and has recorded 60 saves on the season for the Tigers.

Maryland has an 11-2-2 overall record and a 3-2-2 mark in ACC play, most recently defeating N.C. State by a score of 3-2 in College Park, MD on Sunday, October 18. The 13th-ranked Terrapins are led in scoring by sophomore forward Jasmyne Spencer with seven goals and five assists for 19 points on the season. Senior keeper Mary Casey has recorded 40 saves in over 1,395 minutes in the net for Maryland.

Maryland has a 10-8-1 advantage in the series against Clemson, which dates back to the 1994 season. However, the Tigers have a 6-2-1 record in games played at Historic Riggs Field. Last season, Maryland won a 1-0 decision over the Tigers in College Park on October 30, 2008.