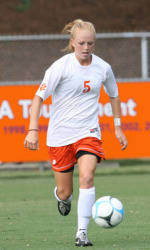 CLEMSON, SC – The Clemson women’s soccer team will travel to Columbia, SC this weekend for the Carolina’s Cup. The Tigers will face in-state rival South Carolina on Friday night at 7:30 p.m. at the Eugene E. Stone III Soccer Stadium. The team will conclude the tournament with an 11:30 a.m. contest against Francis Marion on Sunday at Stone Stadium.

The Tigers are 3-0 on the season, most recently defeating UNC Asheville by a score of 8-0 at Riggs Field. Clemson is led in scoring by senior Julie Bolt, who recorded four goals against the Bulldogs and now has five on the season for 10 points. Sophomore Judea Davis has three goals and junior Lindsey Jackson has two goals and an assist. Sophomore Paula Pritzen has posted three solo shutouts in goal for Clemson.

South Carolina has a 2-0-1 record entering Friday’s game, most recently defeating Boston University by a score of 1-0. Two players, Lindsey Small and Samantha Diaz-Matosa have scored one goal apiece for the Gamecocks so far this season. Goalkeeper Mollie Patton has recorded 11 saves and has not given up a goal in three games for South Carolina.

Clemson has a 10-3 advantage in the series against the Gamecocks. Last year, the Tigers won a 1-0 decision over South Carolina at Riggs Field. Midfielder Molly Franklin scored the game winner in the 72nd minute with assists from Lily Boleyn and Jackson.

Francis Marion is 0-3 on the season, falling to #20 Wake Forest in a 3-0 decision in Florence, SC last weekend. Angela Salem leads Francis Marion in scoring with one goal and one assist. The Tigers and Patriots have met just one time on the soccer field, with Clemson winning a 4-0 decision at Riggs Field in 2006.