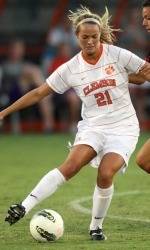 “The girls played very well in the first half,” said Head Coach Eddie Radwanski. “We started strong and were in the game. In the second half though, I thought we sat in too deep and gave up too much space. We put ourselves in a position to win the game and that’s all you can ask for. It was a tough result for the team and I thought we deserved better.”

The Tigers got on the board first, in the 18th minute of play, when junior forward Maddy Elder scored her seventh goal of the season. Sophomore defender Erica Kim and senior midfielder Rachel Hurd assisted on Elder’s goal. It was the fourth assist of the year for Hurd, who now ranks second on the team in assists on the season.

NC State evened the score in the 64th minute, when Shelli Spamer scored on a free kick. Neither team scored in the remaining 25 minutes of regulation, sending the game to overtime. Nearly seven minutes in to the first overtime period, the Wolfpack’s Tanya Cain netted the golden goal, at the 96:52 mark, to give NC State the win.

Sophomore keeper Lauren Arnold posted eight saves in the game for Clemson, while Wolfpack keeper Kim Kern recorded four. The Tigers took nine shots in the game and had five corner kicks, while NC State took 22 shots and 12 corner kicks. There were three fouls called on Clemson and seven on NC State in the contest.

Clemson will play host to third-ranked Wake Forest on Sunday afternoon at Historic Riggs Field. The game between the Tigers and Demon Deacons will begin at 1:00 PM.