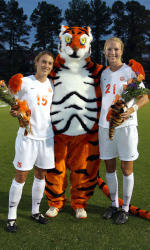 CHESTNUT HILL, MA – The Clemson women’s soccer team fell to #13 Boston College by a score of 1-0 on Sunday afternoon at the Newton Campus Soccer Field in Chestnut Hill, MA. With the loss, the Tigers conclude the season with a 5-11-1 overall record and a 1-8-1 ledger in Atlantic Coast Conference play. The Eagles improve to 12-4-2 overall and 6-3-1 in the ACC and will begin play in the ACC Tournament in Cary, NC on November 5.

The Tigers and Eagles played over 61 minutes of scoreless soccer before Boston College took advantage of a corner kick and put the game’s lone goal on the board. Caitlin Hiler sent the corner kick into the box from the right side where Julia Bouchelle was waiting to head the pass into the right side of the net.

For the game, the Tigers took four shots to Boston College’s 23. Clemson had three corner kick opportunities, while the Eagles had nine. Sophomore Paula Pritzen posted eight saves in goal for the Tigers and Sarah Buonomo recorded one for Boston College.

“First and foremost, I’m really proud of how this team battled a very good team today. They did so to honor Julie and Molly who have given that type of effort for four years. These two seniors have led our team by a wonderful example both on and off the field.

“There were several strong performances today, led by the goalkeeping of Paula Pritzen. We will look to build on the efforts of these last two games as we work to become a stronger and more united team in the years to come.”

Sunday’s contest was the final career game for seniors and four-year starters Julie Bolt and Molly Johnson. Bolt, a two-time All-ACC Second Team honoree, concluded her Tiger career with 19 goals and 12 assists. Johnson started all 80 games of her four-year career on defense for Clemson.