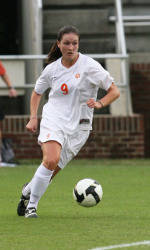 ATHENS, GA – The Clemson women’s soccer team defeated Florida Atlantic by a score of 4-0 on Sunday at the Georgia Nike Invitational in Athens, GA. The Tigers improve to 2-2 with the win, while the Owls fall to 1-4. Freshman forward Jennifer Ficklen and junior goalkeeper Paula Pritzen were named to the Georgia Nike Invitational All-Tournament Team.

Elder netted the Tigers’ first goal, and her fifth of the season, at the 5:04 mark. The Richmond, VA native chipped the ball over the Florida Atlantic goalkeepers’ head from the left side of the box for the unassisted score.

The freshman struck again less than four minutes later at the 8:32 mark. Fellow freshman Callie Cavanaugh passed the ball to Elder, who sent it into the bottom right corner of the net from the left side of the box. The goal was the sixth of the season for Elder, while Cavanaugh recorded her first assist of the year.

Sophomore forward Tara Cort netted her first goal of the 2009 campaign less than two minutes into the second half. Cort took the ball up the field herself and fired it into the far left corner of the net past the Owls’ keeper.

Sophomore midfielder Rachel Hurd scored her first goal of the season, and of her Clemson career, in the 84th minute. Hurd broke away from her Owl defender and popped the ball over the head of the Florida Atlantic goalie to conclude the scoring for the Tigers.

Pritzen recorded the shutout for the Tigers in goal. It is the second shutout of the season for the Houston, TX native, who has tallied 12 saves on the season.

“Today was a much better effort from everyone and there were a lot of positive pieces we can build on,” said Head Coach Hershey Strosberg. “We scored two early goals, which always helps with momentum and getting into a solid rhythm.

“Having Jen, Paula and Maddy make the all-tournament team is a good individual honor that also reflects our team efforts. Jen was excellent in both games this weekend and has been very solid for us.

“I’m happy for the girls and they should feel positive about this. We also know what we are working towards and we have more challenges to prepare for.”

Clemson will play host to the Carolina’s Cup on Friday, September 11 and Sunday, September 13. The Tigers will face South Carolina on Friday at 7:30 PM and Furman on Sunday at 2:30 PM at Historic Riggs Field.